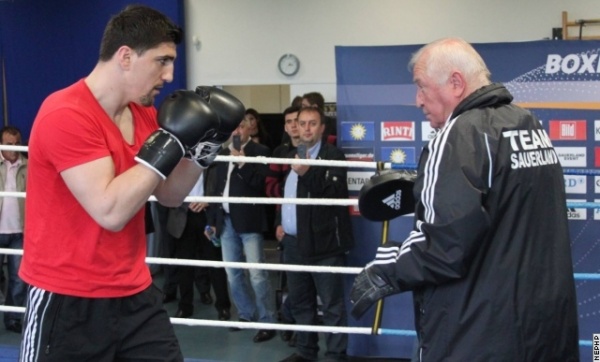 Champion and challenger are ready for war on June 8! Saturday night will see Marco Huck (35-2-1, 25 KOs) take on Ola Afolabi (19-2-4, 9 KOs) for the third time. After winning their first matchup and drawing the second, the current WBO Cruiserweight Champion is hoping to close the chapter Afolabi once and for all, when they square off at the Max-Schmeling-Halle in Berlin, Germany. During today´s public workout both fighters made it clear, that their confidence is sky high ahead of the big fight. The first one to show off his set of skills was Afolabi. After some rope skipping and hitting the pads with his coach Fritz Sdunek he addressed the media in attendance. “Fritz Sdunek got me into the best shape of my life. So far ahead of every fight, I was either physical or mentally fit. However, this time round, I have hit top form in both aspects. Now, I am the total package!” Sdunek agreed with his prodigy. “Under my guidance, Ola learned the meaning of discipline. That will make the difference come Saturday.” Next to step into the ring was the champion himself. And although this was just a workout session, Huck made it obvious that he was not messing around. The punches connecting with the pads held by his coach Ulli Wegner seemed to be meant as a message to the watching Afolabi. “I hope he understood what I was doing there. Afolabi will get to feel the best combinations inside the ring on Saturday,” said the 28-year-old. Ulli Wegner got straight to the point. “We will keep the belt in Berlin!” Also showing off some of their abilities where light heavyweights Robert Woge (11-0, 10 KOs) and Eduard Gutknecht (24-2, 9 KOs) who will also be competing for international honors in the main support on June 8.

Tickets for the big fight night at the Max-Schmeling-Halle in Berlin, Germany, are available at www.eventim.de and www.boxen.com.