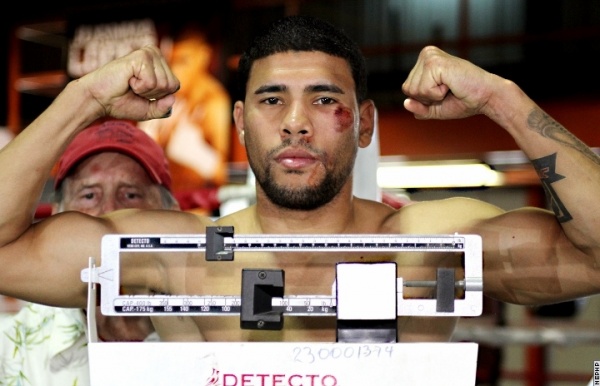 Photos: Juanma is Bruised Up During 30-Day Weigh-In CAGUAS, PUERTO RICO – Former two time world champion Juan Manuel “Juanma” Lopez is completely focused in his next fight against the World Boxing Organization (WBO) champion Miguel Angel “Mikey” Garcia on June 15 at the American Airlines Center in Dallas, Texas in a Top Rank presentation to be broadcast on HBO.

“We are working to make the weight and to get the best condition. Our goal was to make 139 pounds today and we made 138, it’s so good”, said Lopez, who was going to train after the pre weigh in. “We are one month before the fight and I’m feeling very good with the training. As we made two fights (in February and April) this year, I kept in the gym all the time. We want to be in 131 or 132 pounds next week and work with that weight for the finals weeks, but I’m so good, eating good and in a good mood”.

Lopez, who come off two KO wins in February and April, 2013, over Aldimar Silva Santos and Eugenio Lopez, respectively, has a bruise on his face because he fell yesterday during his morning workout.

“In a reaction work with the medicine ball, I slipped on the on the wet race track and fell, unbeleivable, that’s the first time in my career”, said Lopez laughing.

Mikey Garcia (31-0, 26 KOs) come off a spectacular win over Orlando Salido to win the WBO featherweight belt on January 19, when he sent Salido four times to the canvas. Garcia won by technical decision in nine rounds when he hurted his nose after an accidental headbutt and didn’t continue the fight.

“I think that styles make the fights and I know that the style of Mikey Garcia is good for me. We are working in it, but also for anything he brings”, said Lopez.