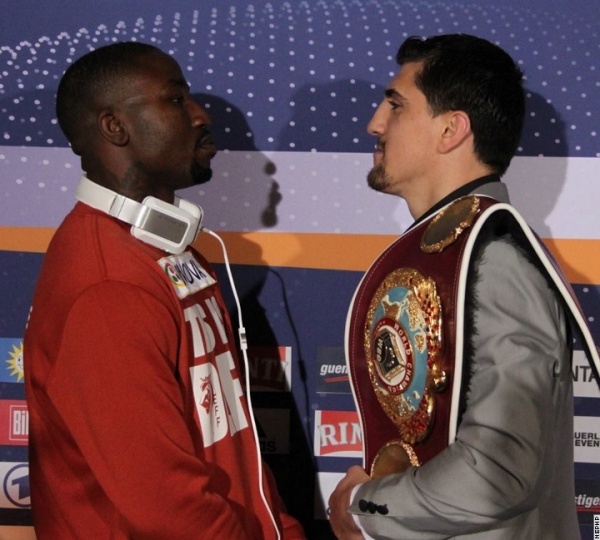 WBO World Champion Marco Huck (35-2-1, 25 KOs) and his challenger Ola Afolabi (19-2-4, 9 KOs) have already entered fight mode. During Wednesday´s press conference, three days before the top-notch cruiserweights square off inside the ring, they got involved into a verbal altercation.

28-year-old Huck accused his opponent of provoking him on purpose. “He is just trying to rattle my cage and is hoping that it will cause me to make mistakes,” said the prodigy of coach Ulli Wegner. “But he is fighting a losing battle. I am the champion and I will still be the champion after the fight. I will give him my answers inside the ring.” And the German was not done yet. “I proved before that I can beat him. But he cannot beat me. I know that I am better than he is. I also have a better fan base behind me, who will be celebrating another victory with me after I am done with that guy.” However, Afolabi who resides in Los Angeles seems to have taken on some of the Hollywood-attitude surrounding him. After being asked if he really is as confident as he makes himself out to be or if he is just an actor, he replied: “I am an actor! Marco wants to give his fans a great show and so do I. All these theatrics ahead of the fight only increase the attention. We definitely enjoyed ourselves. It got a bit heated, but that is the way it’s supposed to be.” However, Afolabi could not resist another attempt to unnerve the champion. “If you are a Huck fan you might say that he won our last fight. If you are an Afolabi fan, you might give it to me. However, after Marco Huck’s last fight against Firat Arslan, Stevie Wonder looked at me and said: Arslan definitely won no doubt about it.”

Huck immediately replied to the laughing Brit: “You are smiling now. But you won’t be after Saturday.” Tickets for the big fight night at the Max-Schmeling-Halle in Berlin, Germany are available at www.eventim.de and www.boxen.com.