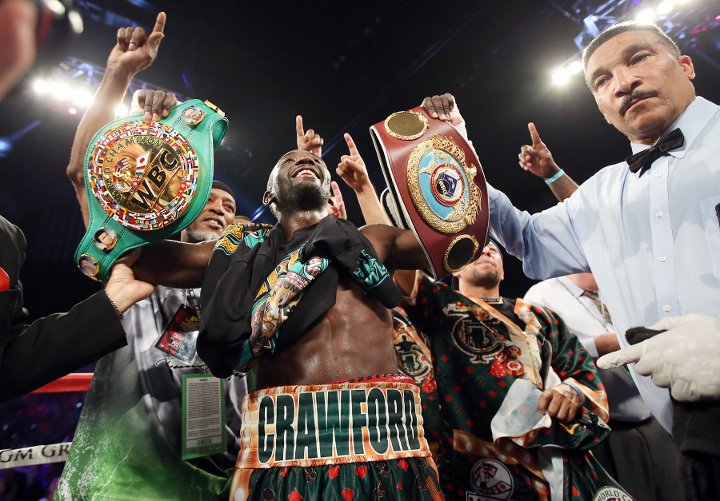 Crawford, who improved to 29-0 with 20 knockouts, dropped Postol twice in the fifth round to seize control of the bout at the MGM Grand Garden Arena in Las Vegas, with two judges scoring it 118-107 for the American and the third seeing it 117-108. In handing Postol his first defeat in 29 fights, Crawford not only added the Ukrainian’s WBC belt to his own WBO title, he put himself in line for a potential date with Manny Pacquiao in the Filipino’s return to the ring likely later this year in Las Vegas. “It’s whatever,” Crawford said of a possible fight with Pacquiao. “I let my coaches handle that. I’m a fighter. I’ll fight anybody. I’m looking forward to the biggest and best fights to get me to that next level.” Crawford, 28, was content to feel Postol out over the first three rounds, before landing a series of damaging lefts in the fourth. He had Postol’s knee on the canvas in the opening seconds of the fifth with a right hook, and sent him down again in the same round with another left. As Postol struggled to deal with Crawford’s quick, erratic movement, the American won round after round, staggering Postol again in the ninth. Postol tried to pour it on in the 12th, but Crawford didn’t yield. “I just stick to what I knew – boxing,” Crawford said. “They say he’s got the best jab in my division, I proved different today.”