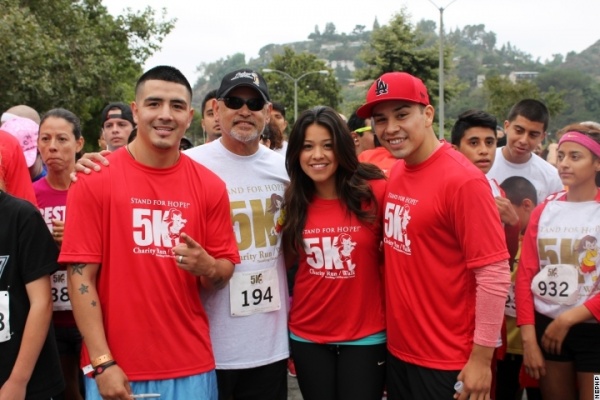 This past Sunday Brandon Rios hosted the annual Padres Contra El Cancer (Parents Against Cancer) Stand For Hope 5k. Brandon brought along his wife and two younger children to also participate in this year’s run/walk. Rios has been an ambassador for PADRES for three years now and was humbled when asked to participate in event. Brandon was asked by media why he’s involved in this particular organization, he answered, “More than anything to bring more awareness of PADRES throughout the nation and the world. My wife and I have always supported St. Jude and now PADRES I just want to do whatever I can to help the children and their families.” Padres Contra El Cancer is a non-profit organization committed to improving the quality of life for children with cancer and other blood disorders and their families. Brandon got many people to join his 5k team, fans came down from North Carolina, Arizona, Fresno and many other surrounding cities around Los Angeles. There was a particular boy 13 year old Andrew Lopez, who dreams of becoming a boxer just like Brandon one day, whose family says joined the 5k with a goal to be able to keep up with his idol Bam Bam. He accomplished his goal and Brandon was very proud of him. Brandon says about Andrew, “He said his leg was cramping up but I just told him to keep going he can do it, and he did! He’s a good kid!” Brandon inspires many kids and many fans of all ages. After 5k Brandon gave about 2 hours of his time to meet and greet his fans at the event and be able to spend some one on one time with them. He did not walk away until every single fan was taken care of. PADRES is very grateful to have such a humble ambassador for their organization and appreciate all the support from Brandon, his family and Team. Funds from the 2013 Stand For Hope 5k will support PADRES’ commitment to raise awareness for childhood cancer and also help expand its level of support services, which include transportation to hospital for treatment; interpreters and case managers; grocery vouchers; and emotional support groups.