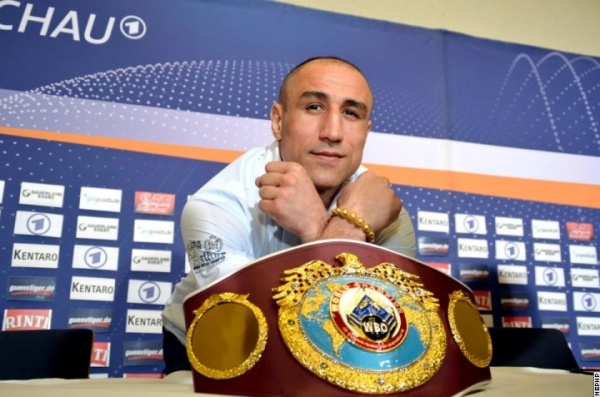 There can only be one winner, and that is Arthur Abraham (36-3, 28 KOs). That is at least the opinion of the WBO Champion himself and his team. The world title fight between Abraham and Robert Stieglitz (43-3, 24 KOs) is just around the corner and unsurprisingly both camps are convinced that they have the edge over their opposition. At today’s press conference in Magdeburg, Germany, the protagonists of the world title bout as well as their coaches and the WBO´s current number one at heavyweight, Robert Helenius (18-0, 11 KOs), gave their statements ahead of Saturday night. These are the best quotes:

Arthur Abraham, WBO Super-Middleweight Champion: I am very excited to be fighting in the city of Magdeburg. My first fight here was when Sven Ottke retired and the atmosphere was amazing. The crowd was even doing the Mexican wave which you normally only get during soccer games. I have never seen anything like that outside of Magdeburg. I can only say one thing about the fight. We won the first fight and consequently took the world championship. Now it´s time for the rematch and we have a clear goal. We have to destroy him and we will do everything we can to reach our goal which showed during our preparations. We have a lot of respect for our opponents but once we step into the ring I have to destroy him, no question.

Robert Stieglitz, challenger: Those are some big words. We will see what happens come March 23. I am in great shape and want to take revenge. There is a reason why I was the world champion for more than two years and I want the crown back. It was a close decision (the first fight). I am excited to be fighting in Magdeburg. The fans will help me to take revenge and I am looking forward to that.

Ulli Wegner, coach of Abraham: I don’t really have to tell you what I want to happen come Saturday. We will leave the ring as the winner. We have to be that confident as Arthur is the reigning world champion. It will be a great fight and in my opinion the first couple of rounds and the reaction of the crowd could be decisive. May the best man win, and it is not a surprise that as a coach I have faith in my guy. We did everything we could to get Arthur into shape and we will give it our all.

Dirk Dzemski, coach of Stieglitz: Robert´s preparation has been great. I am convinced that this will be an exciting fight, maybe even a war. I hope that the home fans will be right behind Robert and keep pushing him throughout the bout. I also hope that he will not make the same mistakes again. We have been working on them for a long time. He has a good game plan and tactics which will surprise you.

Robert Helenius, WBO #1 heavyweight: I am really looking forward to Saturday. My opponent is great and therefore it will be a great fight. My sparring partners have all been good and I will just do my thing. I will keep him at distance with my jab and then get him with a hard right.

Wilfried Sauerand: I have to say that we always had great events here in Magdeburg. I am not surprised at all that it will be a sellout crowd on Saturday. The people here have a great knowledge of the sport and they know when there is good boxing on display. I hope that Arthur will be as successful here as Sven Ottke was and that the fight on Saturday will have the same quality as their first one in Berlin.

Kalle Sauerland: I said before the first fight that it will turn out to be a war, and that was exactly what happened. I don’t expect the rematch to be any different. We are confident and believe that we will again turn out to be the winners.