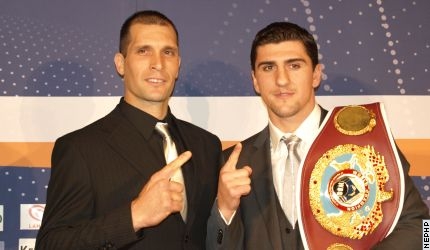 WBO Cruiserweight Champion Captain Huck (33-1, 24 KOs) could not believe his eyes when he met challenger Rogelio Rossi (17-2-1, 11 KOs) at today´s press conference in Ludwigsburg, Germany. Listed at two meters by BoxRec, the “Argentinian Giant” turned out to be much smaller than that.

“Maybe he shrunk of fear,” Captain Huck said. “Doesn´t matter anyway. I don´t care what size he is. I have knocked out taller and smaller opponents. I will clinch a spectacular victory on Saturday night. He will not get my title.” Huck then measured his opponent. The result: 192 centimeters!

Rossi seemed to enjoy the confusion regarding his height. “It´s true, I´m not two meters tall,” he stated. “But I will still defeat Huck. If you´re scared, your opponent looks much bigger than he actually is. I guess this has happened to Huck. I will take his title on Saturday night. I have trained hard and I will win.”

“We have done sparring with tall guys and with small guys, we are prepared for everything,” he stated. “If Rossi was clever, he would have stood on tiptoes during the face-to-face to look bigger than he is. I don´t think he can cope with Huck´s explosiveness and aggressiveness anyway.”