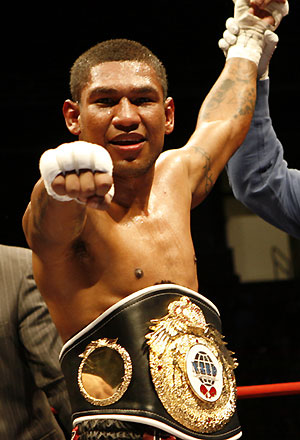 The proposed fight would occur on Feb. 25 in St. Louis on the undercard of Devon Alexander vs. Marcos Maidana, a deal which is all but completed.

“Negotiations are in progress right now,” said Max Garcia, who shares training duties of Perez with Dean Familton. “They’re working hard on it, and once it’s signed.  we’ll be ready to go Feb. 25th.  Eloy’s ready and we’re due for something like this.”

Perez and Broner were in serious talks two months ago to fight for the 130-pound strap vacated by Ricky Burns of Scotland, but the two sides could never agree.  Broner ended up getting the opportunity, stopping Vicente Rodriguez in his hometown of Cincinnati last Nov. 26.

Perez scored a technical knockout of his own in his adopted hometown of Salinas against Ira Terry on Oct. 28, but now comes to the table as a challenger this time around.  Both fighters are promoted by Golden Boy.

“Last time, we were supposed to fight Broner, but it was in his backyard and we weren’t getting a fair enough offer,” Garcia added.  “Then there was a counter-offer in San Jose, but Oscar [De La Hoya] himself called it off because he wanted Eloy to get a title and unify it with Broner to make it a bigger fight.”

Now Broner has the belt, and Team Perez can wait no longer; they want a title shot now.

“We want to fight the best, and Adrien Broner’s the champ,” Garcia said.  “It doesn’t necessarily means he’s the best, he just has the title.  Eloy will show he’s the best come the 25th of February.  It’s going to be a war, and he better be ready to stand and fight.  Like my lieutenant colonel in the U.S. Army said on a sign in front of his office almost 40 years ago, ‘You’re Here to Fight, and Don’t You Forget It.’ “