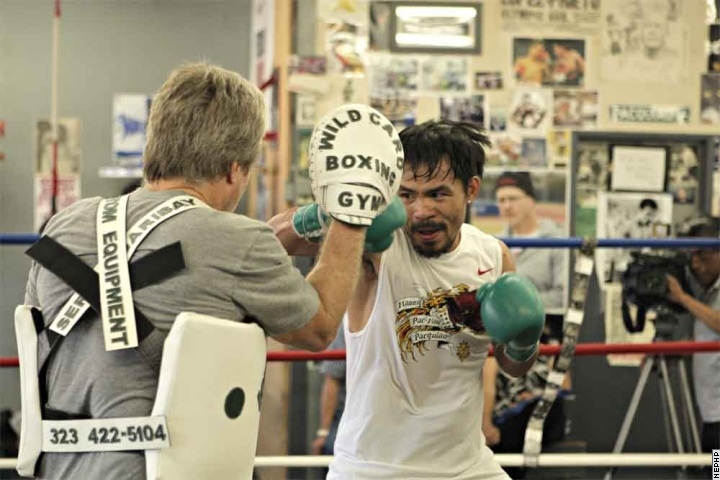 BAGUIO CITY – After logging 70 rounds of punching the mitts and 210 minutes of road work, World Boxing Organization welterweight champion Manny Pacquiao declared himself ready to move into the more grueling and tedious aspect of his high altitude training here.

Pacquiao, who is putting his 147-pound plum on the block against undefeated American junior welterweight kingpin on June 9, asked chief trainer Freddie Road to advance the sparring in his preparation two days ahead of schedule and the Hall of Fame guru obliged.

For the first time since his last fight November last year, the eight-division belt-owner will have the taste of how it is to trade blows with an opponent today when he mixes it up with Russian junior welterweight prospect Ruslan Provodnikov.

Roach scheduled only four rounds of sparring in order not to preserve the gains the camp had attained in almost two weeks here and a fortnight each in Sta. Rosa, Laguna and General Santos City.
“Manny personally asked me to advance the start of sparring session Thursday and I consented,” Roach told Business Insight after the training session last Tuesday. “That only means one thing, Manny is fit and ready to move into the next level of preparations.”

“Only four rounds. I don’t want him rush things up, especially at this stage of readiness program. However, if he asked to, say two round more, why not,” Roach said.

“As I have been saying, Manny knows Manny. Only he knows what to do and what not to do as far as his physical status is concerned. That’s what differs him from the other fighters, Roach explained,” Roach said.

“I approved of advancing the sparring because I know he’s already ready to stand the rigor of that part of training,” the 52-year-old Hall of Famer assured.

The start of the sparring session was originally scheduled Saturday, the day Pacquiao would have completed his first two weeks of altitude training in this, the country’s summer capital.

Both Pacquiao and Roach agreed the fighter is far from reaching his fighting form and that there are still many things to accomplish.

“Marami pang dapat gawin, but I feel I am already 50 percent ready to fight,” the 33-year-old Pacman said. “Pero hindi kami aalis ditto (Baguio) na hindi ako 100 percent.”
“Yeah, we are still at the halfway mark of preparations,” Roach butted in. “We still have some five weeks to go.

Provodnikov,with lightweight compatriot Rustam Nugaev, a former Pacquiao sparmate, tagging along set foot in this city Monday night after a long 15-hour plane trip from their hometown Beryosovo, Russia. Nugaev is not new in the Philippines having been Pacquiao’s mate twice, the first during the Filipino hero’s preparations in his second fight with Erik Morales and during the fine tuning program against Oscar Larios.

Only Provodnikov though will serve as the Filipino’s mate at the Baguio training camp. Provodnikov said he had watched some of Pacquiao’s fight but expressed amazement seeing Pacquiao did the mitts with Roach.

“He’s very powerful and fast,” he said through Nugaev, who servers as his interpreter. “I am honored for inviting as Manny’s sparring partner and I’m ready to provide him all he needs in his training.”