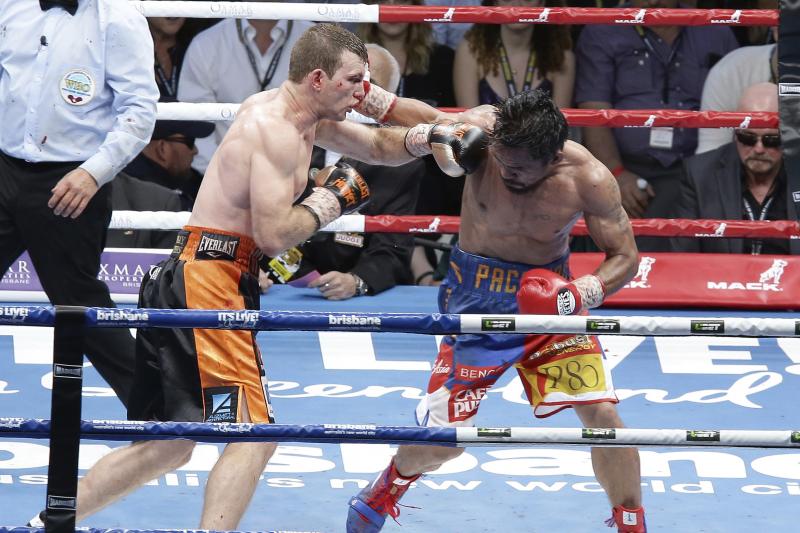 The result was a stunner considering the staggering difference in pedigrees between the fighters, which was illustrated in the final betting line. According to Odds Shark, Horn was a 6-1 underdog, while Pacquiao was a heavy favorite at 1-4 odds.

The loss will raise plenty of questions about Pacquiao’s future, since he was angling to capture a convincing win over the unproven Horn and use it as a springboard to one more big payday.

According to ESPN’s Dan Rafael, Pacquiao earned $10 million up front plus a portion of Filipino television sales for his participation, while Horn made $500,000 guaranteed plus a cut of the gate money.

But after taking home the win, Horn will be staring at some bigger paydays down the line.

The Australian challenger came out charged up, and he landed several big blows in the early going to signal he wouldn’t back down. In fact,  CompuBox noted Horn posted an 8-6 edge in power punches landed during the first three minutes.

And as Yahoo Sports’ Kevin Iole observed, Horn’s unconventional style wasn’t easy for Pacquiao to grasp at the outset:

But with something of an unhinged approach, Horn opened himself up to serious punishment—and Pacquiao pounced on opportunities thanks to flurries of combinations.

ESPN Stats & Info offered a look at the disparity in effectiveness as things progressed: Horn refused to back down and continued to throw haymakers at Pacquiao—most notably during Rounds 6 and 7—and his persistence made for an entertaining clash for an American audience that tuned in late on a Saturday night, per ESPN.com’s Myron Medcalf:

This free fight is 100x better than the $100 fight we’ll pay for next month between McGregor and Mayweather.

The tide seemed to turn for good in Round 9 when Pacquiao cranked up the intensity and wobbled Horn significantly, but the 29-year-old stood tall at the urging of his corner and gutted out the final three rounds in impressive fashion.

With that context in mind, The Undefeated’s Mike Wise drew a fitting parallel as things wrapped up:

Who called this Rocky-Apollo I? That’s exactly what it’s like. Horn trying to survive in his hometown, bloodied, beaten but unbowed.

But as seemingly every observer noted, the unanimous decision was a stunner, especially with one scorecard reading 117-111, since Pacquiao appeared to be the more polished fighter despite an absence of major power:

Pacquiao will now face major questions about his future as Horn ascends to the top of the welterweight division.

As trainer Freddie Roach noted before the fight, Pacquiao needed an impressive showing—and likely a knockout, a result he still hasn’t secured since 2009—in order to secure a coveted rematch against Floyd Mayweather Jr.

“Jeff could derail us really badly. Manny is in a must-win situation; he wants a rematch with Mayweather,” Roach said, per the Australian Associated Press (via the Guardian). “And with Mayweather you have to look good against an opponent; you have to be impressive.”

For now, though, the focus will be on second fight with Horn since there is a rematch clause in their contract.