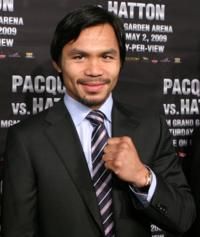 According to WBO welterweight champion Manny Pacquiao, he was treated like an opponent during last week’s infamous telephone call with Floyd Mayweather Jr., Pacquiao claims he was offered a $40 million dollar guarantee – but nothing further- for a welterweight mega-fight on May 5th at the MGM Grand in Las Vegas. Mayweather would retain 100% of the money generated from pay-per-view, and other various sources of revenue. Pacquiao turned the offer down and requested an even 50-50 split, which Mayweather rejected.

“He said he will guarantee me $40 million but I won’t have any share on the pay-per-view and other sources of revenue,” said Pacquiao to veteran reporter Nick Giongco of Tempo. “How can he leave me out of the pay-per-view when I generate more than him in pay-per-view sales? I am still praying that Mayweather gets enlightened because I believe that I am not being unreasonable.”