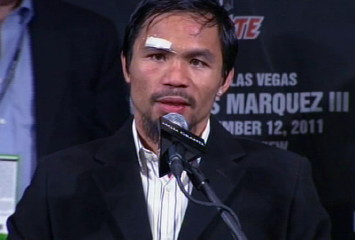 Pacquiao: My cut is fine; I want Mayweather By Michael Collins: Someone needs to tell Bob Arum that WBO welterweight champion Manny Pacquiao is saying his cut is okay and he’s ready to take on WBC welterweight champion Floyd Mayweather Jr. because Arum is still going on the belief that Pacquiao needs more time for his cut to heal. Arum is meeting with Pacquiao today in the Philippines to assist him in picking out his next opponent.

Pacquiao told Manila Standard writer Ronnie Nathanielsz “There is a possibility of fighting Mayweather in May and I’ll discuss what is best for us to do…[the cut is] fine and there’s no problem.”

Arum has an issue with the size of the MGM Grand, which is where Mayweather wants the fight to take place. The Grand only seats around 16,800 fans, and Arum wants to have a bigger arena that seats 45,000. Arum figures that $20 million will be lost if he agrees to let Pacquiao fight Mayweather at the MGM Grand rather than a larger venue.

Of course, Arum doesn’t seem to recognize that even more money will be lost if never takes the leash of Pacquiao and lets him fight Mayweather. The fight will generate huge profits on pay per view, both at home and in small theaters nationwide. Holding back on the fight just because the venue isn’t big enough is a narrow way of looking at the fight. Pacquiao won’t make anywhere near the kind of money he’ll make for a Mayweather fight if he goes ahead a takes on one of the four opponents that Arum has selected for him.