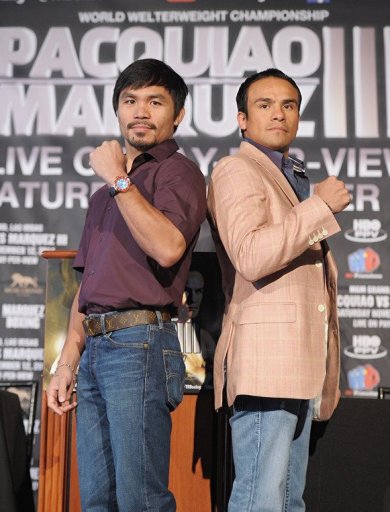 Pacquiao-Marquez IV in the making Arum oversaw the final news conference at Wynn Las Vegas for Saturday’s Sergio Martinez-Julio Cesar Chavez Jr. middleweight championship fight, ate lunch and then dashed off to a meeting with Pacquiao adviser Michael Koncz, who also is here this week.

The goal of the meeting, Arum said, was to lock down final terms for Pacquiao-Marquez IV.

“We’re having a meeting about Manny’s next fight and to get everything finalized,” Arum said. “My goal is to finalize the Marquez fight, but I have to meet with (Koncz).”

Pacquiao is due to return to action on Dec. 8. The HBO pay-per-view fight will take place at the MGM Grand in Las Vegas, contrary to rumors that the fight would be held in Marquez’s hometown of Mexico City.

The three candidates to face Pacquiao were Bradley, who won a highly disputed decision against him in June, Marquez and Miguel Cotto, who was stopped by Pacquiao in the 12th round of an action-packed welterweight title fight in 2009.

Pacquiao’s first choice was Cotto, who declined and instead made a deal to challenge junior middleweight titlist Austin Trout on Dec. 1 at Madison Square Garden.

With Floyd Mayweather Jr. out of the picture — for this year at least — that left Marquez and Bradley.

Pacquiao is 2-0-1 against Marquez in three action-packed fights that each ended in a storm of controversy over the scoring, with many believing Marquez had won all three fights — especially their most recent encounter. That was in November at the MGM Grand, where Pacquiao eked out a majority decision to retain his welterweight title.

Bradley pulled the upset on June 9 when he was awarded a controversial split decision against Pacquiao, which resulted in worldwide outrage over the scoring because most people had Pacquiao winning easily — except two of the three judges, Duane Ford and C.J. Ross.

But there has been a divide within Top Rank and Pacquiao’s team on which opponent to select after Cotto turned them down. There also was Arum’s concerns over the cost of putting together each fight compared to the kind of $20 million-plus purse Pacquiao wants.

Some involved wanted to make the Marquez fight because it is, by far, the bigger pay-per-view event based on previous buy rates. The third fight last year sold 1.3 million units, according to Arum, substantially more than the approximately 950,000 sold by the Pacquiao-Bradley fight.

Pacquiao and Marquez also have a rivalry that has enthralled fans through three fights.

Arum said that if the deal is finalized before the end of the week, he hoped to launch the promotion next week with a news conference in Los Angeles.

Arum said Bradley likely would return against an opponent to be determined in November or December on HBO. Arum said he would like to bring Bradley’s fight to the Theater at Madison Square Garden to “expose him to the fans and media in New York.”