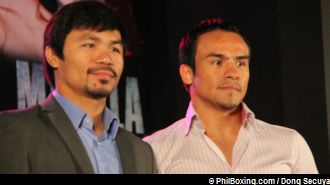 For the first time ever, HBO will telecast live a world championship fight weigh-in event when worldwide superstar, WBO Welterweight champion Manny Pacquiao and his formidable challenger Juan Manuel Marquez tip the scales on Friday, Nov. 11 at 6:00 p.m. ET/3:00 p.m. PT.  The half-hour boxing special on HBO will be hosted by Jim Lampley, who will be joined by commentators Max Kellerman, Emanuel Steward and Harold Lederman, as well as featured guests in providing boxing fans with a ringside seat for the festivities.  All the action will take place at the MGM Grand Garden Arena in Las Vegas.

In addition, boxing fans with broadband access can log onto insidehboboxing.com to view live streaming of the official weigh-in television program.

The official fight headquarters for boxing fans all week long is insidehboboxing.com where fans can log on for exclusives features from fight week in Las Vegas.  Follow HBO Boxing news at www.hbo.com/boxing ; on Facebook at www.facebook.com/hboboxing ; and on Twitter @hboboxing.