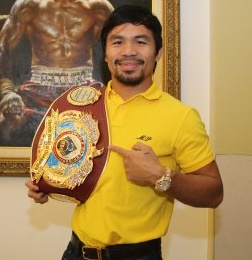 With just ten weeks before the Manny Pacquiao-Jeff Horn fight, it appears that there may be a snag as conflicting reports have come in regarding the location of the fight. Although both Duco Events and Top Rank have indicated that the fight was to take place at Suncorp Stadium in Brisbane Australia, Pacquiao’s advisor and marriage counselor Michael Koncz threw a curveball yesterday when he announced from Abu Dhabi that the fight would “100%” be held in the United Arab Emirates.

Shortly thereafter Manny Pacquiao Tweeted “See you in UAE for my next fight. #TeamPacquiao”.

The announcement came as a surprise to many fight fans in Australia, but Duco Events head Dean Lonergan still believes the fight will go forward in Australia.

“Duco have been working with Top Rank over the past three months to have the fight in Suncorp Stadium in Brisbane.” Lonergan told Fightnews.

“We are nearing completion of the deal, and as far as I’m concerned Top Rank is the exclusive promoter of Manny Pacquiao and until Top Rank tells me otherwise we shall continue to try and get this deal done.”

Lonergan is hopeful to finalize the deal in the coming week.

“We had discussions today with the team of Top Rank that we continue on. I like to think that if we get a deal done it will be in the next week.”

Lonergan also told Fightnews that he “would be very surprised” if any other city or state could be ready to host April’s Pacquiao-Horn fight in “such a short space of time.”