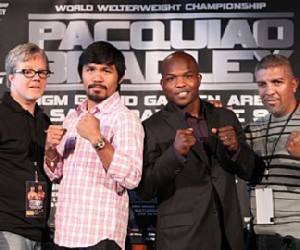 The union will allow MLB Advanced Media to not only stream the HBO Pay Per View event, but also help to develop subscription digital content and create mobile applications as Top Rank seeks to improve its ability to monetize its digital content for major fights.

“We’re pushing to get boxing back into the mainstream,” Lucia McKelvey, Top Rank’s executive vice president, told The Sports Business Journal, “and we were looking to partner with somebody that owns their own content and understands exactly what we’re experiencing and trying to do.”

MLBAM and Top Rank Boxing will participate in a revenue-sharing agreement, selling the live stream of Pacquiao-Bradley separately from the traditional pay-per-view telecast for $54.95. The telecast will cost $54.95 for standard definition, and $64.95 for high-definition.

A series of apps for the Apple iOS and Android mobile platforms and several other connected devices is also under development.