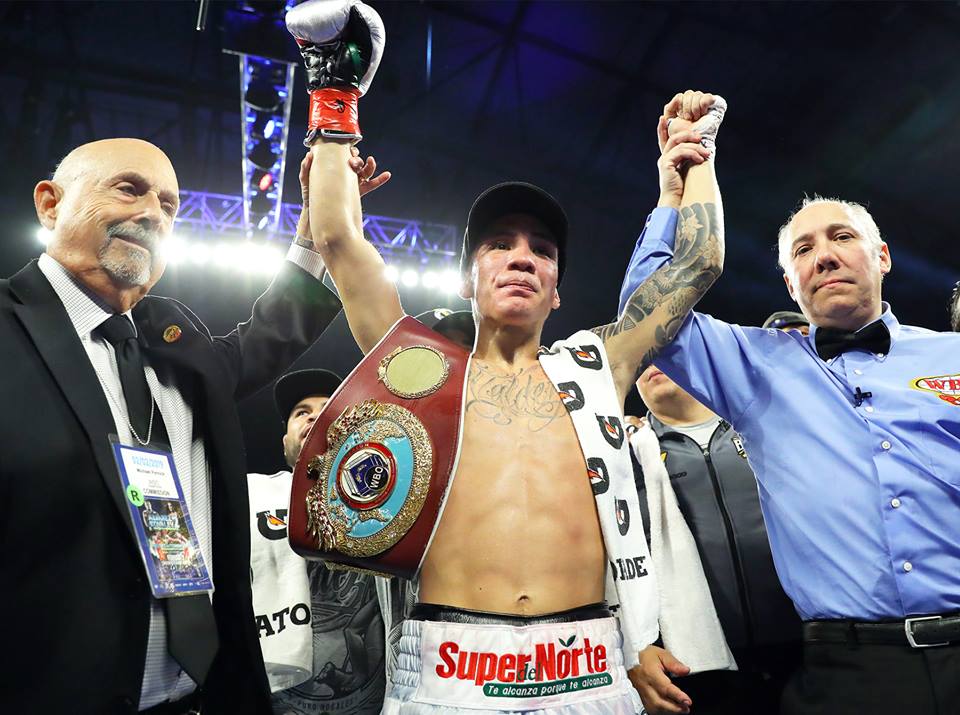 OSCAR VALDEZ: ‘MY WBO BELT IS GOING BACK TO MEXICO WITH ME!’

Every now and again, we on the outside looking in get reminded that those guys and gals in there are not like us. I mean, what were you thinking when you saw Oscar Valdez fight Scott Quigg and then learn he was fighting the dude with a jaw that was broken from round five onward?

And – oh wait – Valdez actually got better in the second half of the bout!

Yeah, the best of them aren’t built in regulation fashion. Their pain tolerance is of a higher caliber; their will on another tier…They are sturdy of body and mind and this is why we marvel at their exploits.

Speaking of exploits…Valdez makes the sixth defense of his WBO featherweight crown on Saturday, June 8, against Jason Sanchez at the Reno-Sparks Convention Center, in Las Vegas.

I chatted with Valdez on Monday and the mood was still impacted from what we fight fans witnessed on Saturday. Andy Ruiz, a buddy of Valdez’s, scored a massive upset for the ages when he stopped Anthony Joshua at Madison Square Garden in New York City, and on DAZN. Valdez effused about the new IBF/WBA/WBO heavyweight titleholder Ruiz but, beforehand, he touched on his most recent bout. And we got to that place after I brought up being out of the ring for 329 days and how that affects a boxer. “I was a little too calm,” Valdez told me of the Tommasone clash.

“It was a long break after that (jaw) injury. There was ring rust. I was 100 percent physically but mentally something was off. I was too calm.” Not so this time, he predicts. “I will be myself. I’ve worked so hard with (trainer) Eddy Reynoso, working on his methods. And I will be myself and let it flow!”

So, Sanchez – “El Alacrancito/Lil Scorpion” – …Does Valdez come in thinking this somewhat untested product has a big stinger? Or does he think the challenger has bitten off more than he can chew and will see that quickly? “My foes are not all known in boxing circles by casual fans and if some don’t know them, they think they are easy. But they are dangerous. It’s every boxer’s dream (to fight for a world crown) and so they will work harder. I can’t let it happen,” he told RingTV.com. “I take this fight very seriously.”

The two-time Olympian gets it, that maybe a win here won’t get him massive acclaim because Sanchez isn’t on all the radar screens. “The casual fans might think it will be easy but it’s not going to be easy. My prediction? I never promise a knockout but I will do my best and leave everything I have in the ring. I take no fight lightly.”

Sanchez could maybe expect a high work rate from Valdez. In the Quigg fight, Valdez went from throwing 70 punches in rounds one through four, to averaging 79 after his jaw was broken. And Valdez should note that a counter right from the Scorpion was what damaged Olea. Sanchez will want to feature head movement or risk getting battered by Valdez. (Valdez-Sanchez and the 10-round co-feature will be televised live on ESPN and ESPN Deportes at 10 p.m. ET/7 p.m. PT. Undercard bouts will stream live on ESPN+, the leading multi-sport streaming service, beginning at 6:30 p.m. ET/3:30 p.m. PT.)

It feels like Valdez is confident but not cocky. His mind is on Sanchez but, of course, he gets asked about those on-more-radar guys, the Leo Santa Cruzes and Carl Framptons and Josh Warringtons. However he craves those match-ups. Sanchez is the front and center though. “Leo might be just as tough as a Sanchez but Leo has that bigger name,” Valdez continues. “About Sanchez, I don’t disrespect any fighter.”

I’m guessing Valdez brings a bit of extra juice with him to Reno, stemming from that Ruiz win. “I got goosebumps,” the Top Rank scrapper stated. “I was so proud of him and his team.” They’d worked together on the Mexican national team, so Valdez had a good idea of Ruiz’s promise and knew he would threaten “AJ.” “I contacted Andy and got a quick message to him and I was happy he could answer back, being so (deluged)! Yeah, he’s a Mexican and I love it. I’m so happy for his team and him. And this belt – my belt – is going back to Mexico with me!”

My three cents: I tend to agree. Sanchez is taking two steps up in class and will need to channel Andy Ruiz and then some if he’s to produce an upset special on ESPN. More likely that Valdez serves him a painful notice of what he has to work on.