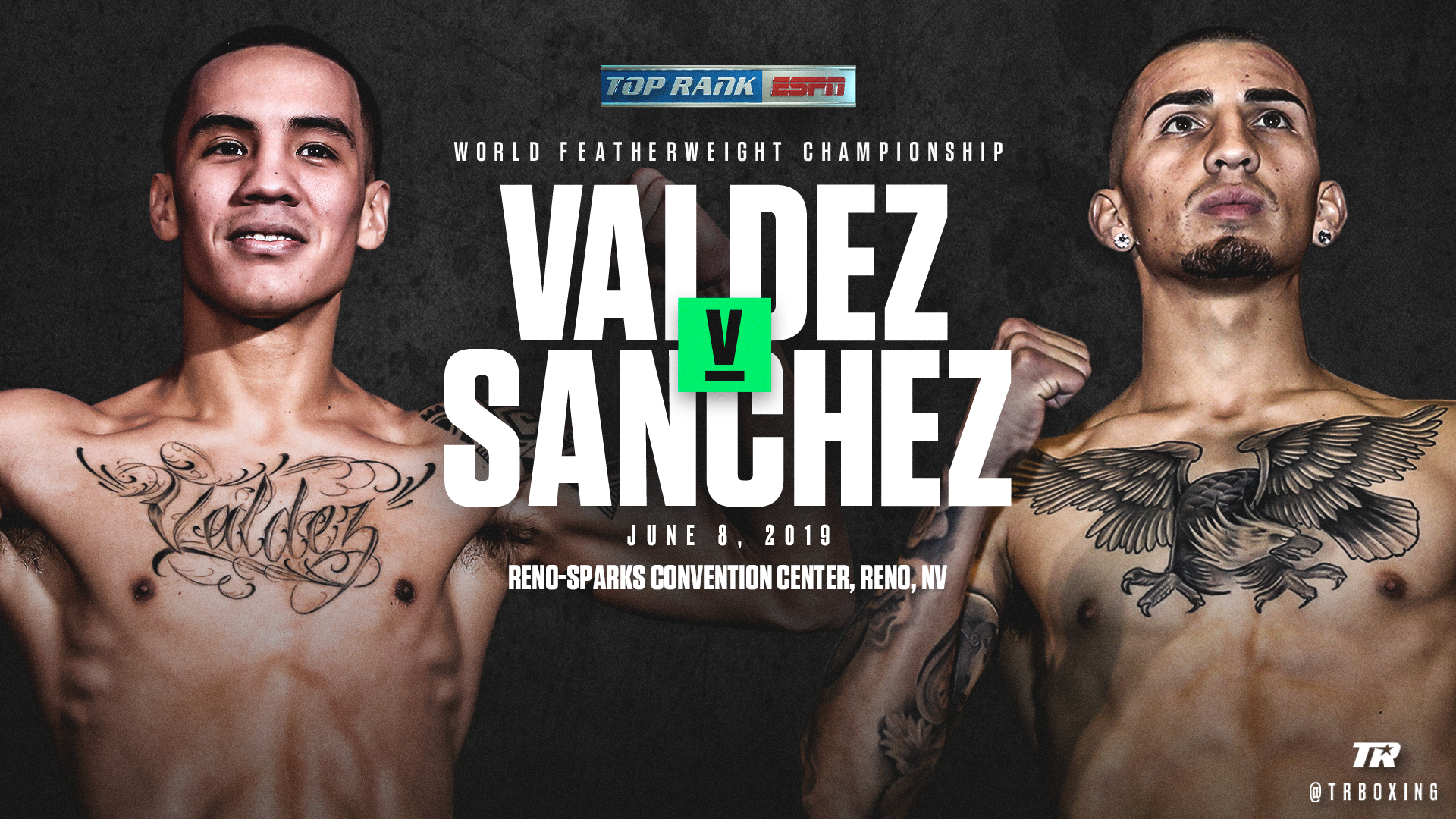 Valdez-Sanchez and the 10-round light heavyweight showdown between title-hungry contenders Sullivan Barrera and Michael Seals will be televised live on ESPN and ESPN Deportes at 10 p.m. ET/7 p.m. PT. Undercard bouts will stream live on ESPN+, the leading multi-sport streaming service, beginning at 6:30 p.m. ET/3:30 p.m. PT. Gabriel Flores Jr. (13-0, 6 KOs), fresh off his third-round knockout over Eduardo Pereira Reis in front of more than 10,000 fans in his hometown of Stockton, California, will see action on the undercard.

“Jason Sanchez is the real ‘Cinderella Man,’” said Top Rank chairman Bob Arum. “He is young, hungry and capable of pulling off a major upset. It should be an exciting battle.”

“I’m excited to be back in the ring for the sixth defense of my world title. I know there is a big target on my back because I’m the champion, but nobody is going to take this title away from me,” Valdez said. “This will be my second fight training with Eddy Reynoso. Training with Eddy, I feel the best I’ve ever felt. I felt great in the ring during my first fight with Eddy in my corner. I know that I will look even better this time out. The fans in Reno and watching on ESPN and ESPN Deportes can expect a great showing from me on June 8.”

“I am truly honored and blessed to have an opportunity like this,” Sanchez said. “Coming from Albuquerque, New Mexico, I knew I had to work extra hard to be noticed and to get where I’m at right now. I will be bringing this belt home to Albuquerque, to my family, my supporters, and most of all, my late brother Alan Sanchez. I believe he guided me down this road and that my journey is only beginning.”

Valdez (25-0, 20 KOs), Mexico’s first two-time Olympian, has thrilled boxing fans with his go-for-broke style. He won the WBO featherweight title in July 2016 and proved his mettle with a trio of 12-round bloodbaths against Miguel Marriaga, Genesis Servania and Scott Quigg in consecutive bouts. Valdez outlasted an over-the-weight Quigg last March by unanimous decision despite fighting more than half the bout with a severely broken jaw. Following the Quigg bout, Valdez took nearly a year off, returning Feb. 2 in Frisco, Texas, to knock out then-unbeaten Italian challenger Carmine Tommasone in the seventh round.

The 24-year-old Sanchez (14-0, 7 KOs) enters this championship fight as one of the featherweight division’s fastest-rising young guns. Last October, he stunned then-unbeaten Jean Carlos Rivera via unanimous decision in Panama City, Panama. Following the Rivera victory, Sanchez signed a long-term promotional contract with Top Rank. He impressed in his Top Rank debut Feb. 2 in Frisco, Texas, knocking out Daniel Olea in the second round. Sanchez hopes to become only the fifth men’s boxer from New Mexico to win a world title.

Barrera (22-2, 14 KOs), a former Cuban amateur standout, defected to the United States in 2009 and turned pro later that year. The Miami-based bruiser won the first 17 bouts of his career before dropping a decision to pound-for-pound great Andre Ward. A perennial contender, Barrera holds victories over Joe Smith Jr., Vyacheslav Shabranskyy, Karo Murat and former super middleweight world champion Jeff Lacy. He challenged Dmitry Bivol for a light heavyweight world title last year and fought valiantly before being stopped in the 12th and final round.

Seals (22-2, 16 KOs), a former linebacker for Alabama A&M University, traded in his cleats for trunks and turned pro after a five-fight amateur career. He was 19-0 when he clashed with Edwin Rodriguez in November 2015. In a seesaw battle that included five knockdowns, Rodriguez knocked out Seals in the third round of a Fight of the Year contender. Seals is 3-1 since the Rodriguez battle, the lone loss coming via disqualification after he hit his opponent while he was on the ground. The winner of this can’t-miss action fight will be in line for a potential world title opportunity.

“I am very excited to have signed with Top Rank, a world-class organization with the best light heavyweights in the world,” Barrera said. “I am excited about the future, but the first step is to handle business June 8 and then I can look forward to a shot at a world title. My ultimate goal is Sergey Kovalev. I’ve been chasing him my whole career. Hopefully, we can finally fight this year.”

“This means everything to me. I had a great opportunity with Edwin Rodriguez, but I went into that fight with a torn rotator cuff. I was basically fighting with just my right hand,” Seals said. “Now, I am 100 percent healthy. This is my time. Barrera had his time. I feel good. I feel sharp. I feel young. I have sacrificed so much and have had a lot of time to reflect on the decisions I’ve made and all of the hardships I’ve gone through. On June 8, I’m going to unleash all of my frustration on Barrera. I don’t want to take anything away from Barrera. He’s a world-class fighter, but I am as well.”