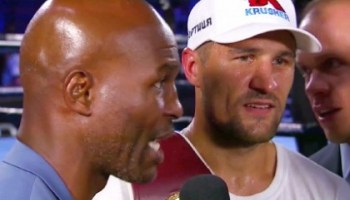 A light heavyweight title clash between IBF and WBA beltholder Bernard Hopkins and WBO counterpart Sergey Kovalev is set for Nov. 8 at Boardwalk Hall in Atlantic City to be televised on HBO.

“The fight’s happening on Nov. 8 in Atlantic City,” said De La Hoya. “Nov. 8 is the date that Bernard Hopkins wanted and that’s what we’ve got.”

The IBF has received signed contracts and a request from Golden Boy for the bout, according to IBF president Daryl Peoples, who said Championships Chairman Lindsey Tucker has the contracts. Kovalev is promoted by Main Events.

“We got an email from [Vice President and matchmaker] Eric Gomez from Golden Boy saying that its on Nov. 8 at Boardwalk Hall in Atlantic City,” said Peoples.

In his last fight in April, Hopkins (55-6-2, 32 knockouts) scored a unanimous decision that dethroned Beibut Shumenov for the WBA belt. Kovalev (25-0-1, 23 KOs) was last in action for a second round stoppage of Blake Caparello on August 2.

Originally from Chelyabinsk, Russia, Kovalev, 31, is 13-0-1 with 13 knockouts in his past 14 fights, including a fourth round stoppage that dethroned previously unbeaten WBO beltholder Nathan Cleverly in August 2013.

Before facing Caparello, Kovalev dropped previously undefeated southpaw Cedric Agnew once each in the second and sixth rounds of a seventh round knockout in March.

A future Hall-of-Famer, Hopkins, 49, won a unanimous decision over previously unbeaten Tavoris Cloud in March 2013 to extend his own record as the oldest man to win a significant crown.

Hopkins first set the record at the age of 46 by outpointing Jean Pascal for the WBC’s title in May 2011 before being dethroned following a majority decision loss to Chad Dawson in May of 2012.

After winning the IBF middleweight title from Segundo Mercado on April 29, 1995, Hopkins went on to defend it a record 20 times before losing to Jermain Taylor by a split decision on July 16, 2005.

After he lost to Taylor and then endured an immediate rematch loss, Hopkins rose into the light heavyweight division for triumphs over Antonio Tarver, Winky Wright, Kelly Pavlik, Enrique Ornelas and Roy Jones, his lone defeat in the division prior to Dawson coming by way of split decision against Joe Calzaghe.

Two of Hopkins’ biggest wins were over Tarver and Pavlik in June 2006 and October 2008, respectively, with both fights taking place at Boardwalk Hall in Atlantic City.

“One fight that comes to mind for everyone was Tarver-Hopkins, during which Hopkins demonstrated his amazing boxing ability. Another one is Kelly Pavlik, so Hopkins has some great history with Atlantic City,” said De La Hoya.