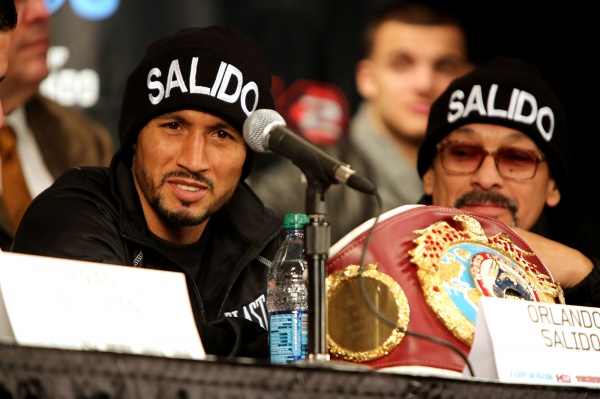 The featherweight clash between Orlando Salido and Mikey Garcia serves as the centerpiece of this weekend’s HBO-televised tripleheader live from Madison Square Garden in New York City.

The bout itself has been a few months in the making. It was originally scheduled to take place last November but pushed back to this weekend after Salido (39-11-2, 27KO) suffered an injury during training camp. The Mexican veteran is at the pinnacle of his 17-year career but still comes in as the perceived underdog against the 25-year old Garcia (30-0. 26KO).

Talks have already begun of what a win for the young Californian would mean for the future of the division and the sport. The bout will mark his third HBO appearance, while Salido fights for just the second time on the network.

Salido is well-versed in the practice of having to earn his way to the top. He’s done it before and is prepared to do it again, as his team reminded all parties on hand during Wednesday’s press conference in New York City.

“I want to remind Bob Arum that he also promotes Salido,” joked Fernando Beltran, who co-promotes the reigning featherweight titlist. “The last few days he’s been talking about Mikey’s plans after the fight. He forgot that Juan Manuel Lopez was 30-0 and we ruined his plans. On December 8, we ruined Manny (Pacquiao’s) plans (when Marquez knocked him out in six rounds).”

Salido was a considerable underdog the first time he faced Lopez, which took place in Puerto Rico nearly two years ago. Lopez was a rising unbeaten featherweight titlist being groomed for a hoped-for showdown with Yuriorkis Gamboa, against whom Salido lost in his previous fight.

The desired Gamboa-Lopez showdown was marinated to the point of overcooking, as Salido stopped the Puerto Rican southpaw in eight rounds. He repeated the feat 11 months later, this time climbing off the canvas to drop and stop Lopez in the 10th round of their rematch last March.

Both fighters are well aware of a real fight existing in front of them, one which many predict will serve as the first true Fight of the Year contender for 2013.  Ever the professional, Salido refuses to look past January 19.

“I’m going to have a difficult fight in front of me,” admits Salido, who makes the third defense of his alphabet title. “I know it’s a tough fight. Just don’t forget that I know what it’s like to be in a tough fight. This one is going to be a war.”

Not much has been said of what’s in store for Salido should he emerge victorious this weekend. His team only hopes that the powers that be will finally stand up and take notice.

“We’re going to huddle up and figure out Salido’s plans,” Beltran states. “Hopefully HBO will keep supporting him. I think we’ll have a real fight. After the fight, we only want to hear Michal Buffer say, ‘… and still’.