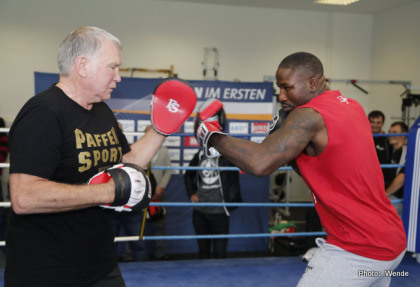 By Ian Aldous: Ola Afolabi (19-2-4) will challenge Marco Huck (35-2-1) for a third time on Saturday June 8th with the WBO world cruiserweight belt up for grabs. The first two fights saw bouts that were very difficult to score, the second so close that it was in fact a majority draw.

Not only was it close, it was a contender for fight of the year in 2012. Last week Ola and K2 Promotions managing director, Tom Loeffler, took some time to talk with me about the upcoming fight.

It’s not often that a fighter prepares for a bout having already spent 72 minutes in the ring with that particular opponent.

To know your opponent so well counteracts the fact that he knows your style so well. It’s interesting how a fighter approaches a trilogy-making fight, “It’s easier mentally because we’ve done it, like you say, two dozen times before and put on a good show. I feel like he’s always come to each fight at his peak, with everything he’s got. It’s just the tip of the iceberg when it comes to what I have to bring, and I’m bringing everything this time.”

At the end of the second fight on May 5th of last year, we’d witnessed a magnificent twelve rounds that saw both fighters stunned but neither on the mat. It was clear to everyone that it was a close fight. Immediately after the final bell, what was Ola thinking? “My immediate thoughts were that if it was close, I’m gonna get robbed. And I knew it was close, I just thought they gonna rob me right away even without hearing anything from anybody. If a fight’s this close in Germany, you’re not gonna get the decision. I was surprised to get the draw, but I was also shocked they didn’t rob me. Everything happens for a reason, we’re here to get it done and we’re gonna end this beef that we have.”

So, with the third fight less than a week away, it begs the question: can Ola Afolabi get a decision over Marco Huck in Germany? “You know, this time I actually think the pressure of the knockout is not as important as the first two fights, because I feel Huck has had two gifts (hometown decisions) back-to-back and the whole world is watching. At one point it was just a fight going down in Germany and they can do whatever they wanna do, but now, I don’t wanna toot my own horn but it’s become like a worldwide fight, people are talking about it. Mainly because the first two fights were good and Huck has got so many gifts and everybody is complaining. I’m not naïve in saying ‘I can totally win on points’, I’m gonna go for the knockout but it’s not gonna be the defining point to make of this fight. I’m just gonna go to win and if a knockout comes, it comes. I really don’t think I need a knockout to win.”

One of the more surprising aspects in the run up to this fight came in the form of Don King winning the purse bids for the fight, despite the fact he doesn’t promote either fighter. According to K2’s Tom Loeffler, it was an inconvenience that didn’t really surprise him. “It went to purse bids and we thought it wasn’t a real, legitimate bid because Sauerland has a TV deal in Germany and we have a TV deal in Germany. I think Don got involved and then was trying to put the fight together and at the end of the day, it just became a delay with the fight. There’s no real setbacks because that just gave Ola some additional time to train and right now, when I watch him sparring and in training, he’s the best by far that I’ve ever seen him.” Ola continued where Tom left off, “It was a surprise that he came into the purse bids because I didn’t know he had anything to do with either fighter.” The postponement of the fight is something that Ola believes he has taken a benefit from. “This is an advantage for me because I had more time to work on my game and I’m still learning as I go. It’s a learning process every day. I’ll still be learning until the night of the fight, so anytime that I get to work on my game is a good thing.”

Despite the fact that Huck has suffered one defeat as a cruiserweight way back in 2007 to Steve Cunningham for the IBF belt, it’s arguably true that Afolabi has been the fighter to trouble Huck the most in his career as a 200lbs fighter. “I don’t need to sound all cocky and all but I actually do believe that. He’s had some tough fights with Lebedev and Firat Arslan beat him like everybody knows (Huck won by a controversial decision). With Firat, he really wasn’t scared of his power, Firat just had his number and the style to defeat him and unfortunately he didn’t get the result. When he fights me, even though he’s very explosive, he knows that in the first round I had him hurt so bad, I just couldn’t finish him.” He continued, “The only person that’s knocked him out was Cunningham and that was because of exhaustion in the last round. So, if you look at all his fights, I’m the only person that’s actually physically hurt him bad. I know he respects that, same way I respect that he’s a top fighter. If he doesn’t respect that he’d just be a fool and he’ll regret it come June 8th.”

Due to the severe test of their previous fight, it wouldn’t have been a surprise to many fans if Huck and his team would have looked to avoid settling the feud with Afolabi – thankfully the WBO mandated the fight. “If this fight wasn’t mandatory, trust me, Huck could say whatever he wants to say to the newspapers and magazines that he’ll finally destroy me in his hometown of Berlin and all that, but if it wasn’t for the mandatory fight, they’d rather fight somebody else. They’d rather give Firat a rematch than fight me because my style presents trouble for him. He pretty much had to take this fight. When he goes on radio and talks about how he’s putting money in my pocket, this guy’s a fool, he doesn’t know how the rating system works. I fought my way back up after I lost in 2009, took me three years to get back to a position to fight him and they robbed me and I’m still mandatory because I kept my (interim) belt. We’re gonna do it again, so he’s not putting money in my pocket, if anything he’s taking money away from my pocket because I won that last fight and I should be getting the bigger cut of the purse. But that’s over and done with and we’re gonna deal with that this time.”

Huck vs. Afolabi III will be shown live on Boxnation in the UK this Saturday night.