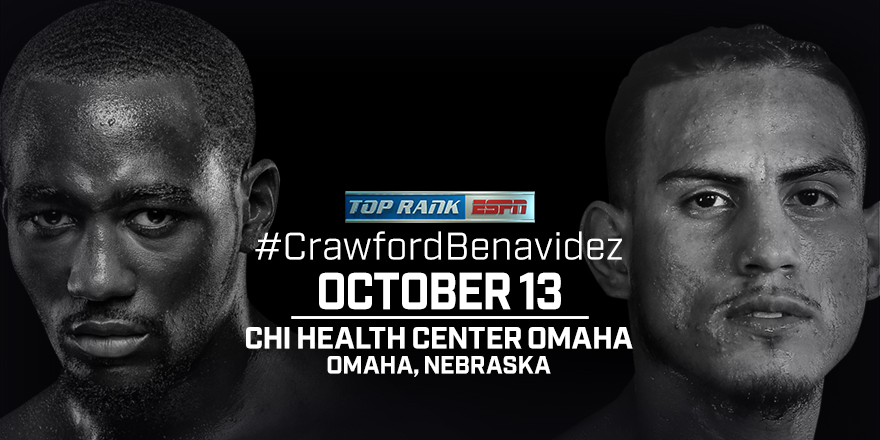 OMAHA, Neb. (Sept. 6, 2018) – Terence “Bud” Crawford will return to the scene of many of his greatest professional triumphs intent on stopping a man who has repeatedly lobbied for a fight. Crawford will make the first defense of his WBO welterweight world title against Jose Benavidez Jr. on Saturday, Oct. 13 at the CHI Health Center Omaha (formerly the CenturyLink Center). Crawford-Benavidez will air live and exclusively on ESPN and ESPN Deportes at 10:30 p.m. ET with undercards streaming live in the United States at 7 p.m. ET on ESPN+ – the new multi-sport, direct-to-consumer subscription streaming service from The Walt Disney Company’s Direct-to-Consumer & International segment in conjunction with ESPN.

It was Benavidez who challenged Crawford in Corpus Christi, Texas, this past February, accusing him of ducking a potential showdown. Crawford invited Benavidez to “step outside” before cooler heads prevailed. They will settle the score in front of a raucous crowd who will be cheering on their hometown hero.

“The Crawford-Benavidez fight is an old-time grudge match. These are two elite fighters who don’t care for each other, to put it mildly,” said Bob Arum, Top Rank’s founder and CEO. “They will battle each other at a fever pitch. I can’t wait to watch the action.”

“This fight is the fight he has been calling for, and now he will get the chance to see what it’s like to be in the ring with a real champion,” Crawford said. I’ll happily give him his first L.”

“I’ve been wanting this fight for three years. I know I have what it takes to beat him, and I am going to beat him,” Benavidez said. “Crawford has been running his mouth and saying I’m a nobody. I’m going to take full advantage of this opportunity.”

Crawford (33-0, 24 KOs) is a three-division world champion, a pound-for-pound elite who was recently named “Fighter of the Year” at the 2018 ESPY Awards. In his first bout of 2018, June 9 at the MGM Grand Garden Arena in Las Vegas, he defeated defending WBO welterweight champion Jeff Horn via ninth-round TKO. Crawford did not miss a beat against Horn despite a nearly 10-month layoff due to a hand injury. Prior to dominating Horn, Crawford became only the third fighter of the four-belt era to unify all the belts when he knocked out fellow unified 140-pound champion Julius Indongo in the third round. Crawford has drawn a total of 44,360 fans in four bouts at the CHI Health Center Omaha, including nearly 11,000 when he knocked down Yuriorkis Gamboa four times en route to a ninth-round TKO to retain the WBO lightweight title in one of the best fights of 2014. Five months after the Gamboa win, Crawford cruised to a wide unanimous decision against Ray Beltran, who went on to win that title more than three years later. In his most recent CHI Health Center Omaha appearance, Dec. 10, 2016 against John Molina Jr., 11,270 fans packed the building as Crawford battered Molina before stopping him in the eighth round. Crawford is 11-0 with eight knockouts in world title bouts and is ranked by many boxing experts as the world’s best fighter.

Benavidez (27-0, 18 KOs), a former WBA interim super lightweight champion, turned pro in 2010 following a standout amateur career that included a 2009 National Golden Gloves gold medal at 141 pounds. His road to this career-defining fight has been anything but smooth, as he was shot multiple times in an August 2016 incident in his hometown of Phoenix. After a nearly 18-month layoff, Benavidez returned on Feb. 3, 2018 in Corpus Christi with an eighth-round TKO against Matthew Strode. It was before the weigh-in for the Strode bout that Benavidez confronted Crawford. Benavidez last fought on the Crawford vs. Horn undercard, knocking out the previously undefeated Frank Rojas at 1:23 of the opening round.