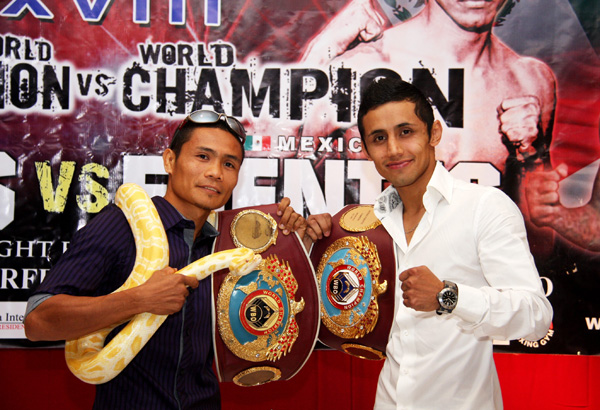 DONNIE ‘Ahas’ Nietes is leaving nothing to chance in his rematch against Moises Fuentes for the World Boxing Organization light-flyweight title on May 10 at the Mall of Asia Arena.

The reigning champion is aware the majority 12-round draw he eked out in his first meeting with the Mexican a year ago at the Waterfront Hotel and Resort in Cebu left a bad taste in the mouth, so much so that he vows to go for a knockout if given the chance.

Proof that he’s preparing hard against the 28-year-old challenger from Mexico City, Nietes spent the early part of his training in the US, where he sparred with the likes of former world champion Giovanni Segura and American Matthew Villanueva.

Now back in the country, the pride of Murcia, Negros Occidental will complete the second part of his training in Cebu.

But ALA Promotions vice president Dennis Canete, who was also a guest in the forum presented by Shakey’s, Accel, and the Philippine Amusement and Gaming Corporation, was quick to add the mandatory title defense of Nietes won’t come in handy.

“Every rematch is dangerous,” Canete admitted. “Siyempre, na-gauge ka na nu’ng opponent mo and Moises Fuentes is a great fighter. So it’s going to be tough.”

A former WBO minimumweight title holder who fought and won against the likes of Ivan Calderon and Raul Garcia, Fuentes (19-1-1, 10 KOs) is a on a three-fight winning streak since facing Nietes, including technical knockout victories in his last two matches against Luis De la Rosa and Omar Salado.

Nietes on the other hand, is fresh from a sensational third-round technical knockout of Sammy Gutierrez last November at the Smart-Araneta Coliseum.

At the same time, the heartbreaking 10th round loss suffered by stablemate Merlito Sabillo to Francisco Rodriguez of Mexico to yield his WBO 105-lbs. crown over the weekend, also serves as added motivation to Nietes in his fight against Fuentes.