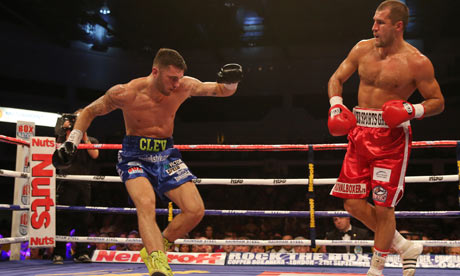 Nathan Cleverly’s unbeaten record went up in smoke as impressive Russian Sergey Kovalev took his WBO light-heavyweight title off him with a destructive fourth-round stoppage in Cardiff.

The 26-year-old Welshman had been seeking unification fights in the US and was under pressure to impress an American audience, with Saturday’s fight at the Motorpoint Arena being televised across the Atlantic.

Kovalev tore up the script by flooring Cleverly twice in the third round and soon forcing a stoppage. Odds makers had struggled to split the pair before what promised to be the hardest of Cleverly’s six world title defences.

The Florida-based Kovalev, 30, went into the fight with a 21-0-1 record and already has a following in the US with many fancying him to snatch Cleverly’s world title in the Cefn Fforest man’s backyard.

Mathematics graduate Cleverly started with the knowledge that Kovalev had a taste for quick knockouts. Indeed, the eastern European challenger was looking to land big right hands from the first minute and won the opening round quite clearly.

Cleverly was busy but made few inroads, despite somehow opening a cut over the challenger’s right eye. Kovalev, meanwhile, was successfully deploying the jab followed by a driven right hand on a regular basis.

Cleverly landed a decent shot of his own towards the end of the second which was his only real moment of success up to that point. He was rocked badly by a left and went down moments later from a clubbing right. He rose to his feet but was unsteady and moments later he was down from another right to the head, made worse by Kovalev hitting him again as he sank to one knee.

He was out on his feet again and the referee Terry O’Connor was poised to stop it, only for the bell to save the Briton.

Kovalev went for it in the fourth and unleashed as many power shots as he could muster. A right and hooking left sent Cleverly wobbly again 29 seconds into the round and O’Connor this time decided enough was enough.

The new champion said: “I came here and nobody believed I beat their champion but everywhere else in the world they knew already how good I was.

“I knew he couldn’t take my power. The fact the fight was televised on HBO in the United States was very important for me.”

On the undercard, Liverpool’s Stephen Smith stopped Gary Buckland with a seething short right uppercut in the fifth to leave the Welsh champion out cold and win the British super-featherweight title.

The Swansea favourite Enzo Maccarinelli won the Commonwealth light-heavyweight belt from Ovill McKenzie with an uppercut of his own in the 11th round to inject new life into his career. PA