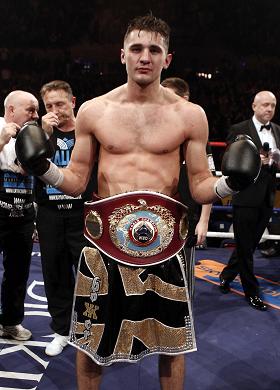 Nathan Cleverly: “Five or Six More Fights and I’m Out!”

Nathan Cleverly, 22-0 (11), makes the maiden defence of his WBO
light-heavyweight title at Liverpool’s Echo Arena this Saturday night.  His
opponent, Tony Bellew, hails from Liverpool and has spent the last few months
trying to get under Cleverly’s skin as he bids to net his first professional
world belt.  Some have enjoyed Bellew’s aggressive approach, others believe that
‘Bomber’ is trying to bully his opponent and will pay for it on the night.
Cleverly insists that he is not the type to wilt under verbal or physical
pressure.

“I’m very competitive,” confirmed Cleverly when speaking to BoxingScene.com.
“I had a bit of insecurity in the past that was probably installed as a
youngster.  A little bit of bullying went on.  I either go into a shell or fight
my way out of it.  I chose to stand strong.  I don’t want to give in to those
kind of people.”

Bellew was in the frame for a crack at Cleverly in May when then-WBO titlist
Juergen Braehmer failed to turn up for his mandatory title defence in a move
that prompted a furious search for a replacement.

Things really kicked into gear when Tony contacted this site to confirm that
he was up for the clash only for the BBBoC to veto the bout due to worries over
Tony’s ability to safely make the weight at such short notice.  It was a major
disappointment for both men, especially after an impromptu slanging match at the
presser announcing Cleverly-Bellew lit the torch paper on a domestic grudge
match.

Five months on, and Cleverly still believes that Bellew’s insistence that he
would outman the champion in a ‘street battle’ could be proven to be wide of the
mark if Nathan opts to engage in a dog fight.

“It could do end up going that way,” his answer to the question of whether
things could get rough.  “I try not to get emotionally involved, stick to a
gameplan.  I can make it an easy night’s work or a hard night’s work for
myself.  As soon as the bell goes I’ll know what kind of fight it will be and
I’ll go on my instinct.

“This rivalry has been gradually brewing over the year.  I suppose it all
ignited at the press conference in May.  After Braehmer had pulled out, Tony was
making phone calls to Frank Warren and Sky TV saying, ‘I want to take this
fight’.  Tony said he could make the weight no problem.  In reality he was never
going to make it and he led everyone up the wrong path.  Both of us have said a
lot, the fight is here now and in a way it’s good to have a bit of needle.”

Cleverly has picked up Commonwealth, British and EBU titles en route to his
world crown, beating established European names such as Antonio Brancalion, Karo
Murat and Nadjib Mohammedi whilst Bellew has struggled in two of his title
bouts, against Bob Ajisafe and Ovill McKenzie (in their first meeting)
respectively.  Pundits gave Bellew little chance when this one was made, that
little slice of optimism over Tony’s odds stems from Nathan’s perceived lack of
respect for Bellew.

Nathan denies this, revealing that he has a healthy amount of admiration for
the three-time ABA medallist.  “I think it is a step forward, really.  Although
Tony Bellew is just on the British scene with his titles potentially he can go
further.  It’s a fight that people want to see, TV are very interested in the
fight and it had to happen.

“Light-heavyweight’s one of the strongest divisions out there.  With myself
and Tony that’s a good British rivalry for the public.  There are some really
good American names and there’s five names that really stand out.”

Carl Froch recently intimated that Bellew could be in with a chance of
victory, pointing out that Cleverly’s a puppy in world title terms and claiming
that, “I can’t see Cleverly hearing the final bell”, during a recent interview
with BoxingScene’s Shaun Brown.  Whilst dismissive of Froch’s comments, Cleverly
believes they have added extra spice to another big showdown should Froch step
up to 175lbs during 2012.

“Part of me asks is it really 100% genuine?” his verdict on Carl’s comment.
“Is it because he’s sparring Bellew, maybe he’s gotten a bit friendly with
Bellew and he’s trying to stand up for him?  There’s no real issue for me.  When
I fought [Danny] McIntosh he was sparring Froch and holding his own – it ended
up a really comfortable night’s work for me.  I take it as a positive that a
fighter of Froch’s standard is sparring my opponent.”

He added: “Obviously with that statement it adds spice to a potential fight
in the future.  Providing I’m still going it’s a fight that makes sense.”

The Cefn Frorest man’s aggressive all-action fighting style belies his
intelligence.  Cleverly may like a bit of machismo in the ring yet he is a
calculating thinker outside it, earning a degree in mathematics whilst still
learning the ropes.

“It was definitely a challenge, especially during exam time.  The workload
was unbelievable.  My sleep pattern wasn’t really the best because of my
nocturnal hours.  My diet wasn’t as sharp as it should have been,” Cleverly’s
recollection of straddling a nascent fistic career with his student days.

“It was demanding and there were times when I wanted to focus on just the one
thing.  The mental strain of it was heavy, demanding and physically it was tough
to remain undefeated in the ring.  There was a time where I was tempted to leave
boxing.  Get a good job, a good living and not bother with it but I dug deep and
when I won the Commonwealth title against [Tony] Oakey it was an indication for
me that I could go far and win titles.

“I was burning the candle at both ends – I didn’t do too bad when it came to
women either!  I lived in the city centre when I was in Uni, the halls of
residence was like a holiday camp and the following year I lived with some mates
in a house, they were probably the best years of my life.  But there comes a
point where I had to stop something.  For the last two years I got my head down,
moved back home and told myself, ‘Let’s be a winner and do it 100%’.”

The Welshman has not boxed in Wales since 2007, winning and defending titles
on the road is par for the course for boxing’s version of Jack Kerouac.  Nathan
is a firm believer in the ‘A ring is a ring’ school of thought, although he
intends to return to his home country sometime soon.

“I’ve been on the road a lot in different venues in the UK.  When Joe
Calzaghe retired there wasn’t really a depth in Welsh boxing, we’d need a strong
welsh undercard for me to headline shows.  It’s only now developing.  Bit by bit
behind the scenes I’ve been building my reputation and me fighting in Wales is
just around the corner.

“The Echo is the perfect capacity for a fight for me and Bellew.  It’s not
ideal me fighting away but I’ve been doing it for the last nine fights.  So
there’s less pressure.  It means that there’s no real expectation on me as there
would be from a home crowd to put on a show.  I’m looking forward to the
challenge and silencing his fans.”

British boxing fans need to make the most of Cleverly, he already has one eye
on stepping away from the sport once he has secured his own legacy, with the
24-year-old arguing that he is six years or even six fights away from having put
the seal on his career.

“I can’t see me being in the sport past thirty. I turned pro at eighteen and
everything was accelerated.  I developed a professional style very quickly.  I
was brought up with a professional attitude.  Another five fights or six fights,
get big names on my record, and earn a lot of money in these fights,” Cleverly’s
prediction of his future career trajectory.