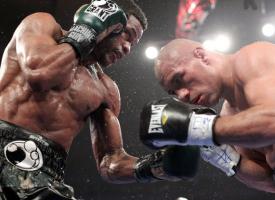 Sebastian Lujan, from Rosario, Argentina, put up a hard fight against rising star, the undefeated Mike Jones, 25-0 (18 KOs), but was ineffective and Jones had little trouble copping a unanimous decision and earning the right to face KO artist Randall Bailey for the vacant IBF Welterweight belt. He also successfully defended his NABO and NABA belts on the undercard of Cotto-Margarito at Madison Square Garden in New York.

Using his long arms and four inch height advantages to their fullest, Jones, a Philly fighter, completely dominated Lujan, 146 pounds, throughout except for the seventh when Jones appeared to take the round off.

Very simple; Jones, also 146 pounds, had too much of everything but courage over Lujan who never stopped trying. It wasn’t a beat down, but Lujan had little more the heart to fight the talented Jones.

Round after round Jones used jabs and uppercuts often throw from outside, to control and batter an ever pressing Lujan. Late in the eleventh Lujan, 38-6-2 (24 KOs), was hurt from a left hook/straight right combination. The bell sound right after Jones landed a similar combination again.

Lujan’s punches were wide and wild, so Jones found them easy to avoid and land his own, more accurate, punches. The referee was Steve Willis.