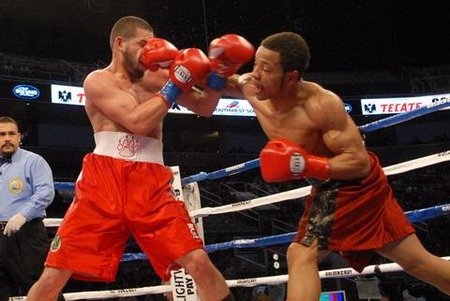 Karim Mayfield on Defeating Lopez for the NABO Title

“I didn’t care about the scores when they were reading them out loud,” Mayfield said. “I just wanted to hear, ‘And the new!’ with my name right after. I’m just happy I did.”

After his older brother LaRon taught him how to box in the Fillmore projects by wrapping five pairs of socks around his fists as a kid, Mayfield took up the regulated version of the sport under the tutelage of trainer Ben Bautista.

As an amateur, Mayfield was a quick study, winning the San Francisco Golden Gloves and making the Olympic Trials at 165 pounds. Soon enough, the pros came calling, and after five years, the 30-year-old known as “The Hard Hitta” in Bay Area boxing circles can bring some hardware home.

BoxingScene.com caught up with Mayfield, who is celebrating his victory in the South before returning to San Francisco later this week.

ON GETTING CAUGHT UP IN THE MOMENT:

“It was just like any fight. When you get there, you think it’s gonna be overwhelming, but it was just like being in any other fight. I’ve had a lot of pressure on me before. One time I had to beat the promoter’s son at the 75th Anniversary of the San Francisco Golden Gloves. Ben [Bautista] said, ‘I’m gonna call you Rise from now on because you rise to the occasion.’ This was no different.”

ON HIS OPPONENT, PATRICK LOPEZ:

“He came out and he was fast. Having about 280 amateur fights, you can tell he was precise. He had some nice technique. I think my orthodox style was throwing him off early, but for the most part, he was definitely a good opponent and a learning experience. That was definitely a step up for me. I think the difference between him and beating Steve Forbes was Lopez’s will. He was so determined.”

“What Ben and I planned, we executed. We knew Lopez has been working to negate what I’ve been doing, which is use my straight right hand and turning him. I had to set him up. I attacked him at times and then showed like I was trying to elude him in order to get him to chase me. We wanted him to walk into punches, and that’s how we did that.”

ON SCORING THE THREE KNOCKDOWNS:

“To be honest, I actually don’t remember when I knocked him down. I just fight. I kind of kept missing with the overhand right. He kept ducking under it. I was trying to set him up with an uppercut but he was waiting for that. I could tell he was really hungry to win that title, so I had to back him up.

“I knocked him down with a straight one-two. He got up and shook it off. Two punches later, the same one-two knocked him down again. I tried to do it again, but he wasn’t falling for it. The other knockdown was from a double right hand, I think. I started using my jab down the line when I felt like I had the fight.”

ON WORKING WITH VICTOR CONTE TO MAKE THE 140-POUND LIMIT FOR THE FIRST TIME AS A PRO:

“I re-hydrated well. I didn’t want to get too big. I stayed around 149-150 [pounds] the day of the fight. I want to thank Victor Conte and the SNAC team, especially the girls at the office like Veronica Conte and Gina Morton for having my back, and ‘Little V’ during my hypoxic (high-altitude simulator) training.

“I felt good out there. Lopez brought the fight to me every second of the three minutes in each round, and just being at 140, never having fought professionally at this weight and fighting this caliber of opponent, I obviously had to be official as far as my nutrition and conditioning. It would’ve been different if Lopez was a boxer, because you can feel your way around a style like that, but if someone comes at you with a title at stake, you need to be in shape.”

ON STAYING AT JUNIOR WELTERWEIGHT OR MOVING UP BACK UP TO 147 POUNDS:

“I feel good at 140, so I’m going to stay. A lot of people lose their power and feel weight drained. I went 10 rounds and dropped the guy three times. There are a couple things I want to work on, but fights are fights.”

ON THE SUPPORT HE’S RECEIVED AT HOME AND FROM HIS TEAM:

“There was definitely a lot of support from people in ‘The City’ saying a lot of positive things, and as much as I inspire them, they motivate me too. We call the Bay Area, ‘The Yay.’ I feel like it’s a family.

“For this camp my managerial team was really behind me and kept everything stress-free, like my publicist, Mario Serrano. My brother, LaRon Mayfield, and my cousin, Marlon Sullivan of Spanatix, they’ve all had my back. We did it together, and we’re not stopping here.”