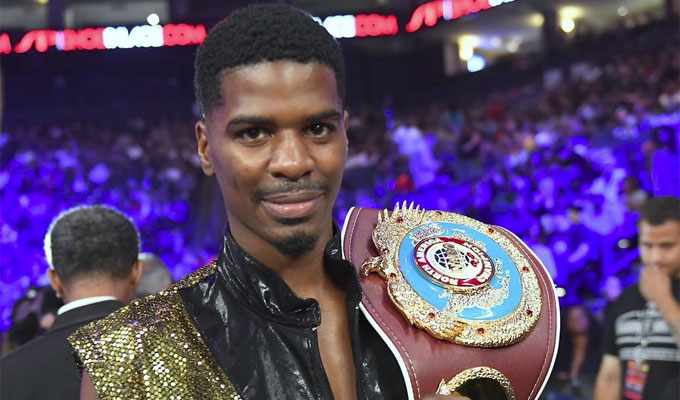 From the hardscrabble streets of Dallas, Texas to the bright lights of Las Vegas, Nevada NABO Junior Welterweight Champion Maurice “Mighty Mo” Hooker (21-0-2, 16 KOs) is well on his way to hitting the proverbial jackpot. Guided by his manager Arnie Verbeek, owner of Maple Ave Boxing Gym in Dallas and promoter Roc Nation, Hooker will make his PPV debut as the lead in fight to Kovalev-Ward when he fights former world champion Darleys Perez (33-2-1, 21 KOs) on Saturday, November 19th.

For Hooker, with his slender build and powerful right hand and of course his signature lollipop that he brings into the ring and enjoys post-fight, the path to this point has been anything but easy. Nothing has been handed to Hooker and every fight to date has been an important stepping stone to get to this stage of his career. Perhaps that is why he seems unfazed of the moment and the fortunes that potentially lie ahead.

“It’s another fight, another big fight. It’s still a ring, I still go in there and do my thing. I try not to let anything get to me, just another fight.”

His trainer Vincent Parra is also a calming influence on Hooker.

“We try to make sure he knows and he does, it’s just him and the other guy in the boxing ring we have been training in. The people get blanked out when you’re focused and the only thing you can see is Darleys Perez, that’s where the focus comes in,” stated Parra.

This will be Hooker’s third fight under the Roc Nation banner as well as fighting alongside promotional stablemate world champion Andre Ward. Like past camps, he has trained and sparred with super lightweight champion Terence Crawford and also added the young but talented lightweight Devin Haney to the mix.

“Sparring with Crawford I learn a lot. We talk after sparring. He tells me what I am doing wrong and what I am doing right. I had to be patient sparring with him. Sparring with Devin, it was good. He brings a lot of energy and is very quick. He reminds me of myself when I was sparring Miguel Cotto. I think he is the next up and coming. He is young and willing to learn the game.”

At 27, Hooker is still relatively young, far from his prime and still learning but with a breakout performance preceding this year’s biggest fight in Kovalev-Ward, this could be the fight that truly launches his career. Roc Nation must hope so by putting him in this position, but Hooker takes it all in stride.

Don’t expect Hooker to look past Perez either even though an impressive win could line him up for big fights in 2017.

Parra is not taking any chances with his prized pupil and knows that Perez is a dangerous fighter and will have Hooker prepared.

“There’s the obvious thing, we are bigger, he’s moving up to Mo’s division, we have the reach advantage which he does on most guys and he’s a pure puncher, but with that being said this is boxing and anything can happen. We just keep it in perspective that he was a world champion and he made it to that point and not a lot of guys do and we have to respect that,” explained Parra.

Parra added, “I just expect if Maurice fights Maurice fight, he’s definitely the better all-around fighter. Maurice has to fight his fight and if he does that I think we are going to take care of business and move on to the next.”

Hooker also takes great pride of being a part of an exciting crop of fighters hailing from Dallas that include Errol Spence Jr., Charles Hatley and Samuel Clarkson just to name a few.

Parra just wants Hooker to be himself.

“Just be Mo, if you watch us, we approach every fight the same. Mo will go out to the middle of the ring and meet him and either he will go out and meet Mo there or he’ll start dancing and go from there. We like to plan on guys having a plan for us, we are not worried about what he’s going to do, and we are more focused on what we are going to do. Maurice is going to fight his fight and make Perez fight his fight.”

Parra continued, “The plan is to be himself. Mo is going to come up and fight at range and look for opportunities and if there is blood in the water I send him at him. Everything is going to be done very methodically. Like Mo said, he’s going to take his time. You can plan all you want, but fights play out and act out and do what we want to do and see how Perez can handle and how he can adjust.”

Although Hooker and Parra are 100% focused on their fight, both weighed in on the Kovalev-Ward mega matchup.

Hooker stated confidently, “Ward is going to outbox him, he is going to make Kovalev adjust to him, and he has ring smarts. Andre Ward is just a good fighter. I see Andre Ward winning.”

Parra expects a great fight and sees it as a toss-up.

“If you’re a fight fan, it’s a fight fan’s fight, it’s going to be interesting. For me, it’s a 50-50 fight, I’m a fan of both guys. Obviously we are stablemates of Andre Ward but on the other side John David Jackson is one of my really good friends and I have been following him and Sergey for a lot of years so for me it’s just a hard fight to dissect because both guys do so many things well. Both guys have very good camps. I look forward to a great fight I think it’s going to be tremendous, it’s very hard for me to pick at this point.”

Hooker, as always, will look to steal the show with his one punch knock out power. And although he is taking the right approach and sees this as just another fight, it is far from it. An impressive performance could put him on a “fighters to watch list” in 2017. So far for Hooker, his manager and promoter have made all the right moves. A big win next Saturday could lead to those potential jackpots that only fighting in Las Vegas could bring. But don’t expect Hooker to be blinded by the bright lights.

“I have no pressure, I am always looking for the knockout, it’s going to be a very good fight and I am going to take it to him.”