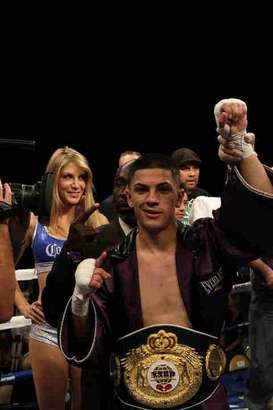 Unbeaten bantamweight Randy Caballero, (16-0, 8 KOs), successfully defended his NABO title Friday night with a unanimous decision over Manuel Roman, (15-2-3, 6 KOs), in the main event on ShoBox: The Next Generation before a partisan crowd at the Fantasy Springs Resort Casino in Indio, California. Scores were 97-92, 96-93, and 96-93 in a mostly tactical affair that served as a solid test for the 21-year old prospect from nearby Coachella, California. Caballero, fighting for the 10th time at Fantasy Springs Casino Resort in his 16 pro fights, acknowledged the step up in competition before the fight, but did not seem overly concerned. “Roman’s a tough fighter, I’m not taking anything away from him,” explained Caballero. “But he’s never been 10 rounds. I’ll probably just break him down and hopefully finish him off in the early rounds.”

Although Caballero did not score the early knockout he predicted, he did put Roman on the canvas in the early going. Both fighters started cautiously, trading jabs and jab, straight right combinations. However in round two Caballero landed a right hook followed by a left hook that dropped Roman back onto the seat of his pants. Roman was unhurt and rose quickly, but the knockdown reflected the fact that Caballero was in control from the get go.

The middle rounds continued to be fought at a measured pace, with little offensive diversity by either fighter beyond the jab and one-two, sapping some of the energy from the crowd which had started the fight enthusiastically cheering on Caballero.

Round six started to see some sustained two-way action by the fighters as Roman cornered Caballero and landed a left hook to the body, right hook to the head combination that forced Caballero to fight his way out of danger, resulting in an exchange of blows as Caballero fought his way back towards the center of the ring. The action heated up further in round eight as Roman began to consistently land lead left hooks to the head and body of Caballero, forcing Cabellero out of the cruise control he had been on since the early knockdown.

With the pressure mounting, Caballero was equal to the task, effectively putting an end to Roman’s attempted rally shortly after the start of round nine with an impressive double jab, straight right combination that stopped Roman in his tracks, punctuated shortly after by a left uppercut. That seemed to signal the end of any drama from the fight, as Roman was unable to generate any further momentum as the fighters mixed grappling and clinching with brief spurts of activity over the remaining round and a half.