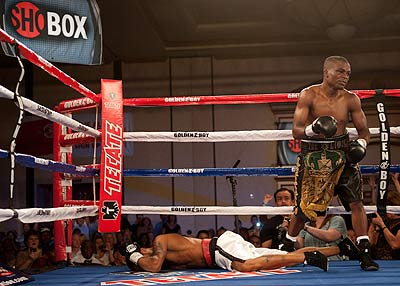 In a battle of undefeated lightweights, popular Sharif “The Lion” Bogere (21-0, 13 KOs) scored a spectacular third round knockout to successfully defend his NABO lightweight title against previously unbeaten Francisco Contreras (16-1, 13 KOs) on Friday night at Texas Station Gambling Hall & Hotel in Las Vegas. A right hand to the jaw followed by a glancing blow off the shoulder laid out Contreras face down for the count at 2:01. Contreras was down for an extended time and was taken from the ring on a stretcher. He appeared conscious.