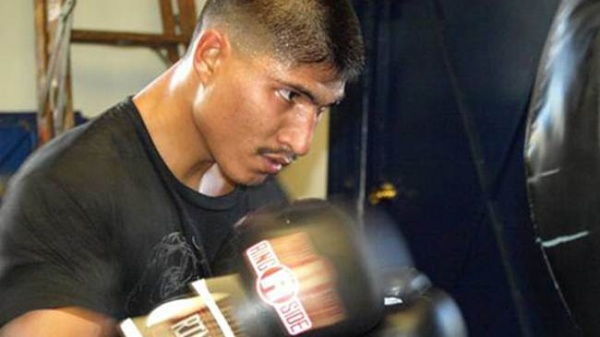 Mikey Garcia – And Another Thing By now everyone knows Mikey stopped Juanma, and everyone knows Mikey missed making weight by two pounds. Everyone knows he is undefeated, blah blah blah, but damn if he didn’t demonstrate boxing at its best Saturday night. It was highly entertaining to watch someone who is so good at his job that he makes it look easy. Unfortunately, some fans mistake his level of talent boring, but they fail to understand and appreciate the difficulty involved with making a violent job like his look easy. He transforms a violent sport into one of grace, power and courage. He puts fundamental together in an almost magical way. What he does resembles the proverbial surgeon. His victories over Solito and Juanma were excellent example of this type of wonderful skill. Generally speaking, surgeons put people back together, but Mikey systematically takes them apart. His kind of skill surpasses that seen in other sports. In several of those sports the beauty and skill manifests itself through such things as a “sweet swing” in tennis, golf or baseball.

You add foot speed and grace, and yes there fun to watch. But, boxing obviously adds another element, and it’s no little thing. As you well know, It happens to be an opponent who is trying to knock your guy’s head off. Not even head hunting linebackers provide quite the same threat as having a guy glaring at you from across the ring. That added element provides a vicarious thrill which is exclusive to boxing. Appreciating boxing allows us to get a kick out of comments like Max Baer made when ask about fear in the ring. He said, “Fear is when you look across the ring at Joe Louis, and Joe looks like he wants to go home early! That fear”.

Certainly it’s fun to watch a skilled boxer show off in the gym without an opponent, when he’s making the speed bag rat a tat with blinding speed, or watch this special athlete jump rope so fast you hardly see the rope, only hear it.. It’s similar to admiring a beautiful horse in the paddock before the race. But, it’s not the race, and not the reality and danger of the actual contest.

When the great ones climb through the ropes into the squared circle, they set themselves apart from other athletes. The great ones show us not only the beauty in it, but of course the violence as well. All prospective boxers go through the same drills: proper stance and keep your guard up. Coaches and trainers harp on their pupils to maintain proper balance and squawk about the importance of the jab. They are told how to move in behind it. Pupils are scolded into doing it again and again, so many times that they want to shout “enough already”! But, the really good ones, like Mikey take simple ordinary things like those drills and elevate them to a crackerjack level. Have you ever heard of Ernest Hemingway’s comment: “Never mistake motion for action.” Well, that’s comparable to taking an average boxer and comparing his skill to that of someone like Mikey Garcia. Really, there is no comparison. When one of Mikey’s scheduled bouts is announced, immediately fans can’t wait for the sound of that first bell. They know once it’s sounds, they will be in for something special. On fight night, the anticipation permeates the air to the bursting point. ,

A few skeptics who would like to burst Garcia’s balloon say, his style is boring. He doesn’t take enough chances. They’re short sighted and miss out on the beauty in watching a great fighter work. Great technicians like Mikey demonstrate not only skill, but courage as well, the kind that allows them to stay calm and focused when under fire . Yes, it takes a certain amount of guts to just step into the ring. But, too many fighters have just enough courage to lose. To be victorious, it takes far more courage. For the victor, it’s not only speed of hand and foot, it’s having a specific purpose, not just flapping arms in the wind. The great ones make precise moves for a reason. Like Mr. Hemingway said, simply moving around doesn’t equate to specific action. To great ones, movements are carefully designed to set up opportunities. The good ones and great ones do it with ease and beauty. The great ones pay attention in the gym and absorb the oft repeated instructions. When we see the finished product, we sit in wonderment, trying to understand how they can make it look easy.

Such Grade A practitioners of the sweet science demonstrate what they’ve learned with a simplicity. To them, moving when and where they need to, avoiding punches and rippiing off properly leveraged and accurately placed counter punches looks too easy. Saturday night Mikey wasn’t afraid of or distracted by Juanma’s reputation. He respected Juanma, but certainly wasn’t afraid, because he did his homework and turned simple drills into something extraordinary. He was faced with an aggressive, rugged, dangerous opponent. Mikey was comfortable and ready, because he knew and understood how Juanma’s aggression could be exploited. It brings to mind what Evander Holyfield once said when asked why he wasn’t afraid of Mike Tyson? The Real Deal explained he knew that an aggressive fighter is most vulnerable when he’s throwing punches. He planned to take advantage ot it, and we all know he did in a big way. But, the truth is the ingredients of a great fighter and examples of the sweet science involve multiples. The multiples are put together in such a way that the smallest opening or mistake made by the opponent becomes is an opportunity. It’s when it’s done properly, that even a violent sport such as boxing can be beautiful.

The beauty comes when many simple things are put together properly, with discipline and desire, and then executed precisely. That’s when it ends up being made to look easy. The golfer and baseball batter hitting the “sweet spot” with smooth, graceful swings. In football it is can be someone like QB Brady courageously stepping “up” into the pocket at just the right second, barely avoiding the on rushing behemoths, who are trying to decapitate him. He stays focused and releases the ball in a tight spiral right on target to the rapidly moving receiver. Of course each sport has it’s own example of beauty and talent, those individuals who are truly gifted with all the needed ingredients to “make things look easy”. That’s what we experience when we are privileged to watch someone like Mikey. We can only look on with awe. Mikey is blessed with that kind of ability. He operates with such ease. After one of his victories, such as the one Saturday night, onlookers are left questioning their own senses. It was that way Saturday night and prompted the comment, “I didn’t think anyone could beat Juanma Lopez that easily!”