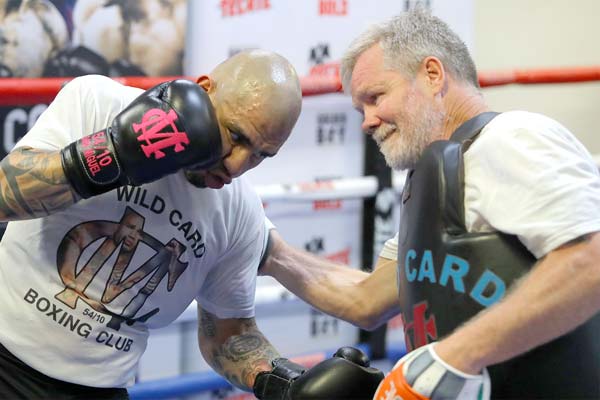 Four-division world champion Miguel Cotto (40-5, 33 KOs) of Puerto Rico hosted a media workout Wednesday afternoon at the Wild Card Gym in Hollywood, California ahead of his bout against Japan’s Yoshihiro “El Maestrito” Kamegai (27-3-2, 24 KOs). Cotto will take on Kamegai next Saturday, August 26 at the Stub Hub Center in Carson, California live on HBO World Championship Boxing. Cotto and his Hall of Fame trainer Freddie Roach had a full workout here is what they had to say.

“We are one week away from the Kamegai fight. Camp was good and I am ready,” Miguel Cotto told Fightnews.com®. “Kamegai is a tough, strong, fighter that comes forward. He will come ready to prove who he is. There is no doubt that I will come out with the victory.”

“Camp was great. He is looking real good. We got the game plan down and we are one-hundred percent ready,” added Roach. “His opponent comes, comes, comes and don’t stop. He is always in great shape but I think Miguel will catch him along the way. It won’t be easy.”

Santa Ana, California’s Ronny Rios (28-1, 13 KOs) took part in Wednesday’s workout as he goes up against Rey Vargas (29-0, 22 KOs ) of Mexico in the co-feature bout for the WBC super bantamweight title.

“This is a big fight. A world championship fight vs. an undefeated fighter. It feels good fighting on this card. It’s the secret be time I fight on a Cotto card but most importantly fighting for a world title,” Rios told Fightnews.com®. “Expect a hungry fighter and show everyone an exciting fight.”