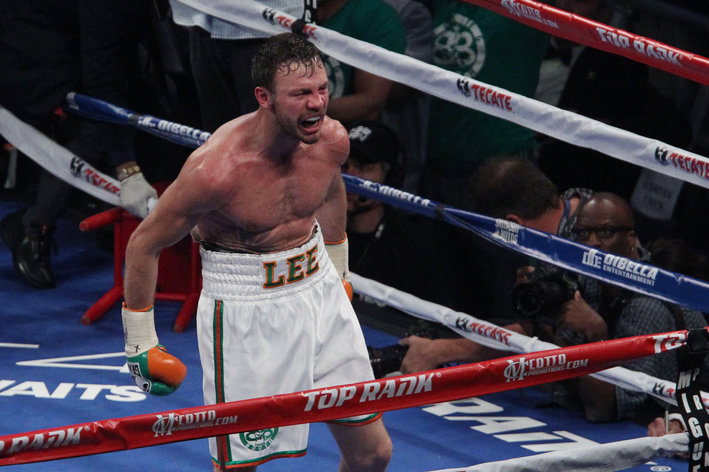 A deal has been struck for Matt Korobov to fight Andy Lee in Ireland for the vacant WBO middleweight title.

Bob Arum announced a deal has been agreed to for Korobov and Lee to fight for the vacant WBO middleweight belt, in a bout promoted by Frank Warren, taking place in Dublin, Ireland. The fight will determine the ultimate replacement for Peter Quillin, who vacated the WBO title rather than fight Korobov. I think it’s probably fair to assume that “Irish” Andy Lee will be the crowd favorite on fight night.

“We have confirmation from last week from Frank Warren that we’re going forward with that fight. The fight will be in Dublin, Ireland, on Dec. 13,” said Arum. “We have an agreement through e-mail, and our lawyers are drawing up a provision of services agreement to send to Frank to sign. I think that it’s a very good fight and a very interesting fight.”

Andy Lee (33-2, 23 KOs) was the protege of the late Emanuel Steward, and was a rising force in the middleweight division until Julio Cesar Chavez, Jr. put a tremdous beating on him. Andy hasn’t seemed quite the same since then, or perhaps he was just exposed on that night. Either way, Andy was getting beaten up again, pretty comprehensively, by young prospect John Jackson this past June, when in a moment of despair and retreat, Lee managed to land a picture perfect right hook on the button that ended Jackson’s night. It was a great punch and an exciting ending, but it hardly restored any legitimate faith in Lee as a top middleweight in my view. So here comes Matt Korobov (24-0, 14 KOs), who doesn’t have any flashy names on his resume but appears to be fairly competent in the ring nonetheless. Solely based on Lee’s recent outings, I would be inclined to favor Korobov, but in no way would be surprised if Lee were able to take this one. I guess that makes this a fair and intriguing fight!