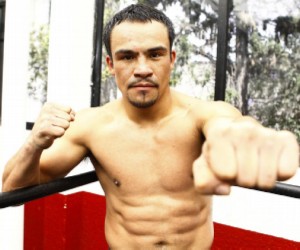 Former four division world champion Juan Manuel Marquez (55-6-1, 40KOs) is not going to make a decision regarding his career until 2013. The Mexican star is still celebrating his sixth round knockout of Manny Pacquiao from December 8th at the MGM Grand in Las Vegas.

Marquez, 39, is receiving a lot of pressure from both sides of the fence. The boxer’s wife, Erika, is pushing him to retire. The fans want at least one more fight.

He will enjoy the rest of the holidays with his family and then he plans to sit down and make a final decision on his boxing future.

Either way he goes, he wants the Mexican fans to know how much he appreciates their support.

“[The Mexican fans] have always been with me and I will never forget that. I want to thank [the Mexican fans] from the bottom of my heart. They are a major force for me when I go into the ring to fight,” Marquez said.

“We have not decided anything about what I will do in 2013. I will enjoy the holidays, discuss everything with my family, rest for a while, and then we will [make a decision].”