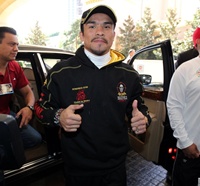 Marquez: Only a Close Win Could Have Made Pacquiao 5 The most talked about topic when it comes to Juan Manuel Marquez besides his upcoming fight with Timothy Bradley is a possible fifth fight with his arch nemesis Manny Pacquiao. After his knockout victory over Pacquiao, Marquez has been continuously asked if he would fight Pacquiao again.

During his last Los Angeles media day, Marquez was made aware that if he beat Bradley Saturday night and if Pacquiao defeated Brandon Rios in November, the demand for a fifth fight would once again be brought up.

“I don’t know what’s going to happen. I’m fighting this Saturday and Pacquiao will fight in November. I don’t know what’ll happen. I need to wait and see how things [turn out]. I think the chapter with Pacquiao is closed. I think so. The fifth fight doesn’t interest me” said Marquez.

Marquez has said that he wants to keep the memory and victory over Pacquiao intact when he walks away from the sport. Even though the Pacquiao fight would equal the biggest paycheck available to him, Marquez says there are things more important than the money.

“The money is important in life but the most important for me is honor and pride and [for] everyone to know what happened in the fourth fight. I want to keep that great moment for all my life” Marquez would tell the media surrounding him.

Pacquiao’s trainer Freddie Roach had been very vocal about Marquez refusing to give Pacquiao a fifth fight as he said they gave Marquez his rematches after their victories. BoxingScene asked Marquez what his thoughts were surrounding Roach’s comments.

“I want to say something that’s the most important to me. If I won the fight with a close decision, I would give the fifth fight. I would sign the contract right after the fight. But I won [by knockout] with a great victory for me so I don’t sign the contract” Marquez would tell BoxingScene.

The stunning knockout seems to have not only definitively ended their fourth fight but also one of boxing’s best rivalries.