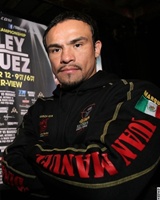 Former four division world champion Juan Manuel Márquez gave praise to Manny Pacquiao for his comeback victory on Saturday night, when the Filipino star won a dominating twelve round unanimous decision over Brandon Rios. It Pacquiao’s first fight since getting knocked out in the sixth round of last December’s fourth bout with Marquez.

Marquez, once again, said there is no interest in a fifth fight with Pacquiao, who returns on April 12 in Las Vegas. Marquez wants a rematch with WBO welterweight champion Timothy Bradley.

“It was important for Manny Pacquiao to look good, so they gave him an opponent like Brandon Rios for his return and he looked impressive. I believe that Bob Arum is doing his job in getting him these types of opponents, but it will be important to see him face tougher competition and see how he looks against those kind of fighters after suffering that knockout,” Marquez said.

But Marquez was not overly impressed because he felt Rios was a tailor-made opponent who had little chance of winning. Marquez says people should not get carried away with Pacquiao’s return until the fighter faces stiffer competition.

“He never gave Brandon Rios the opportunity to connect with a solid punch , so we didn’t get to see how Manny Pacquiao [would react] after that knockout,” said Marquez. “When Manny Pacquiao fights someone with speed and intelligence, someone who counters – Manny does not know what to do or what to expect. Brandon Ríos lacks speed and intelligence inside the ring. He is a fighter who just moves forward and punches. And if you do not bring speed with you, you are going to lose against him.”