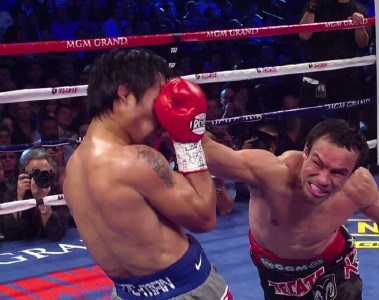 By Chris Williams: Juan Manuel Marquez (55-6-1, 40 KO’s) says he feels content with his 6th round knockout win over Filipino Manny Pacquiao last December, and he has no interest in fighting him again for a bigger payday because he feels he’s already proven himself by beating.

Marquez said to ESPN “I don’t think about that [fighting Pacquiao] anymore. Anything that was pending was settled in every way. If he would have knocked me out the way I did to him, how am I going to ask for another fight? Keeping that feeling is grandiose.”

Marquez is taking the right approach. Why bother fighting Pacquiao again when he’s already proven that he’s better than him in their four fights. Marquez got jobbed on the win in the first fight after out-boxing Pacquiao from the 2nd round until the 12th.

Marquez also was on the receiving ends of highly controversial decisions in 2008 and 2011 in fights that the boxing public had him winning.

It’s probably true that if Pacquiao had knocked Marquez out cold last December instead of the other way around, Marquez would be getting totally ignored by Pacquiao and his promoter Bob Arum in trying to land a fight with him.

Marquez will be fighting Pacquiao’s conqueror WBO welterweight champion Tim Bradley (30-0, 12 KO’s) on October 12th in a fight on HBO at the Thomas & Mack Center, in Las Vegas, Nevada, USA.

The fight won’t bring Marquez nearly the kind of money that he made against Pacquiao, but he doesn’t care about that. Marquez wants to capture another world title and Bradley has the belt that he wants.

This is about Marquez’s goals and legacy. He wants to beat Bradley and take his strap to capture his 5th division world title.

Bradley took a lot of punishment in his last fight against Ruslan Provodnikov. He had better hope that his head has healed from that beating because if there are any lingering problems then Marquez will knock him out.