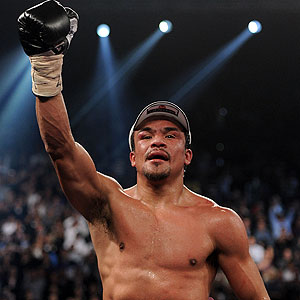 Marquez-Cuenca for WBO title in April Mexican three-division world champion Juan Manuel Marquez has confirmed to Fightnews.com that his next fight on April 14th against undefeated southpaw Argentinian Cesar Rene Cuenca (42-0, 1 KO) will be at the “New Mexico City Arena” in Mexico City for the WBO super lightweight world title. There is a possibility it could be for regular crown with Bradley fighting for the WBO welterweight title against Manny Pacquiao on June 9 in Las Vegas, but for now it’s assured that Marquez-Cuenca is for the WBO interim super lightweight world title.