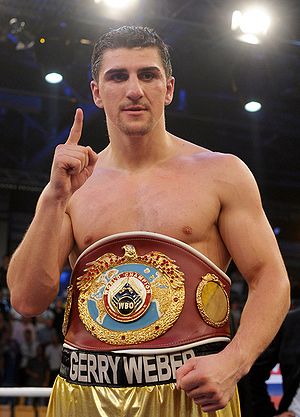 Marco Huck Has Decided To Stay at Jr. Heavyweight

Huck to stay at Jr. Heavyweight

The decision has been made: After careful consideration and joint discussions with Hall of Fame promoter Wilfried Sauerland, trainer Ulli Wegner, Sauerland Event general manager Chris Meyer and sports director Hagen Doering, Marco Huck (34-2, 25 KOs) has decided to stay for now at jr. heavyweight and defend his WBO championship belt against mandatory challenger and interim champion Ola Afolabi (19-2-3, 9 KOs). “I would like to immediately invade the heavyweight division, however I’ve been persuaded to first continue in the jr. heavyweight division,” said Huck. “That’s okay with me. I’ll cut everyone there to bits starting with Afolabi. He’s a strong man, but to me he has no chance.” Sauerland Event has started talks with Tom Loeffler, Afolabi’s representative, and will shortly announce the date and venue.