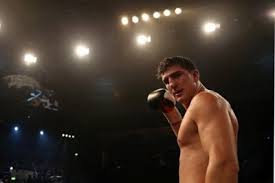 After his convincing win over Ola Afolabi on Saturday, WBO cruiserweight champion Marco Huck feels ready for a rematch against mandatory challenger Firat Arslan, who was watching from ringside. “I want to give the fans some even more spectacular fights and prove that I am able to beat everyone in convincing fashion,” said Huck.

Recarding the Afolabi fight Huck stated, “Today, I proved that I am first and foremost a boxer and not just a warrior inside the ring. This time, I was in tip-top shape – unlike to last year’s clash with Afolabi, where I was nowhere to my current level of fitness. I was focused on the task ahead of me and it showed.” Huck’s trainer Ulli Wegner agreed, commenting “I can only praise Marco for this win. The way he fought from the beginning to the end was close to a perfect performance of him. Afolabi might be the more refined boxer of the two but tonight he lost against the better man and the better strategy.”

Afolabi stated, “I gave my best but it wasn´t enough. Huck is the rightful winner as I have no excuses at all.” His trainer Fritz Sdunek was also disappointed: “I thought that Ola might pull the fight around in round ten but Marco upset our plan.”