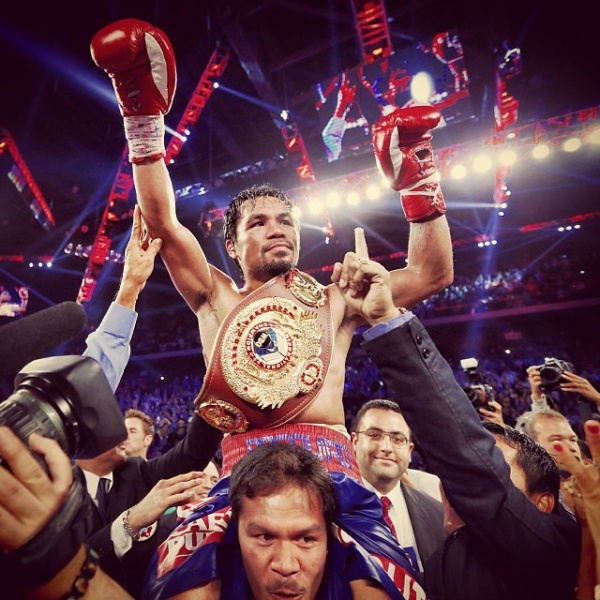 Manny said “This fight is for you,” to the people affected by the typhoon.

The Philippines, post typhoon, deserves some good tidings, and Manny Pacquiao did what he could to provide that in the main event at the CotaiArena in Macao, on a Top Rank card shown on HBO pay per view on Sunday morning, Saturday night in the US. Pacquiao had his way with Brandon Rios, fighting a sharp, smart, disciplined fight against Rios, who was two steps slow and severely lacking in the hand speed department against a rock-solid Pacman. Manny had said we’d see “the old Manny,” and not an old Manny, and did he deliver. His mobility gave Rios fits, and not even the most cynical of us worried as we went to the cards. The scores were 120-108, 119-109 and 118-110 for the Congressman.

“This fight is for you,” Manny said, to the people affected by the typhoon.

After, Pacquiao (seen having his way with overmatched Rios in Chris Farina-Top Rank photo) said to Max Kellerman he is all the way back from his back to back losses, to Tim Bradley and Juan Manuel Marquez. He wanted a KO, but said Rios was “very tough.” Manny said he did get hurt at one point, maybe the fifth. He referenced going to pay respects to the Rios corner after. He said he has a job to do in the ring but we are all brothers and sisters after that. Did he re-establish himself, and who does he want next? His time is not over yet, he said, and next? It’s up to Bob Arum, “I don’t know yet.”

Rios after said that Manny had speed, but his power wasn’t much. He got snippy with Max, asking him to assess his performance, after Max asked him if he thought he proved something. “Do you think I’m a punching bag?” he barked at Max, who stood his ground nicely. “I don’t think you’re a punching bag, I think you’re incredibly determined,” the announcer said, and moved on. Rios called Manny “one of the greatest boxers in the world besides Mayweather” but reiterated that Manny’s speed was too much.

Pacman was 54-5-2 entering the ring at the largest casino in the world. Rios, born in Texas, who grew up in Kansas, living in CA, was 31-1-1. The WBO international welter crown was up for grabs.

In the first, the lefty Pacman, an eight-time world champ, worked the left to the body. Rios went down, a slip, at :51. Rios worked his free right in a clinch late. A left lead to the head for Manny got in clean and hard. The hand speed differential was obvious.

In the second, Rios had better luck. He came forward, but not foolishly. Then Manny flurried to the body at the minute mark. A right sent Manny back, and then Manny poured it on late in a tight round. “Don’t get in a fight, keep boxing this guy,” Freddie Roach said after.

In the third, Manny stuck and moved, to good effect. The movement was winning this round for Manny. Robert Garcia said to be aggressive but smart, and he asked for uppercut, and not to chase Manny.

In the fourth, Manny worked with the right, and the jab set the table some too. Right hooks worked for Manny. He kept his movement up and Rios didn’t follow willy nilly, but he wasn’t busy enough to score the round. In the fifth, a straight left landed hard and Rios grinned, but man did it score. An underneath right scored clean then, and lefts to the body impressed the crowd, heavily pro Manny. Manny mostly moved to his right, away from Rios’ right hand, all night. Garcia asked Rios to remember the gym work and the plan.

In the sixth, Manny kept on fighting smart, sticking, then moving. His body work, with both hands, was obvious. Manny started ripping after complaining Rios went low. We saw blood then on Rios’ left eye.

In the seventh, Manny kept on whacking away, looking strong and disciplined. His right eye was swelling by this time and Rios needed to ramp it up, get rumbling. Manny shook his head after Rios flurried, telling him he had nothing.

In the eighth, Manny let Rios come to him, and then launched and jetted. Rinse and repeat. A left hook landed clean on Manny, at 1:05 but he didn’t blink twice. Manny again won the round with effective aggression. “Let’s go Brandon,” said Garcia, in Spanish. “You got to stay close to him,” he said. Roach said the hook-left hand, under and out was the working plan.

In the ninth, a seven punch combo wowed the crowd, for Manny. The ref warned Rios for being chippy at 1:15; he needed to do something different. He didn’t, not enough. Garcia asked Rios to stay in closer, and “throw more punches, don’t throw from far away.” In the tenth, Manny looked energized, and stayed smart. The Rios face didn’t look all that healthy. In the 11th, Rios had much better luck. Manny seemed a bit tired, and Rios landed scoring shots. But Manny still outlanded him. In the 12th, Manny again popped and then ducked under, to his right, not risking getting caught retreating straight back. Blood seeped from Rios’ left eye as he peered through his gloves. We went to the cards..

Manny went to Rios’ corner to pay respects after the round, and that included ex pal and strength coach Alez Ariza, who kicked his trainer Roach in the chest a few days before, and mocked his Parkinson’s Syndrome.

WBO “We urge you help typhoon victims in the Philippines with your donations!”