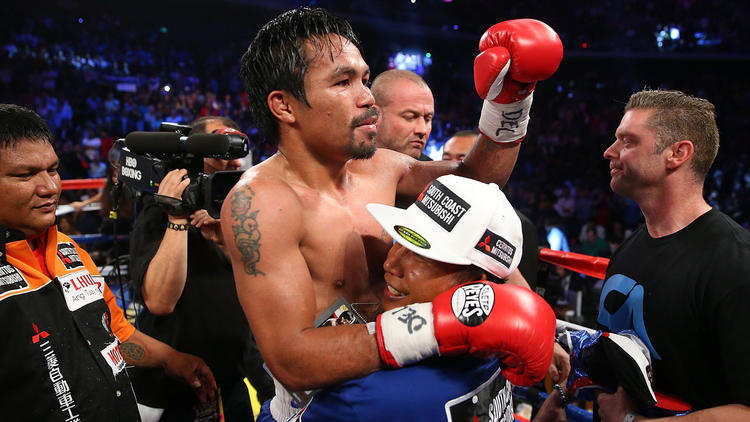 Manny Pacquiao used the momentum of his career-best six knockdowns Sunday to launch a renewed push for a much-anticipated fight against Floyd Mayweather Jr.

“For me, the fans deserve to see that fight,” Pacquiao told the Los Angeles Times in the post-fight news conference. “It’s time to see that happen. People can prepare for it early next year.”

While there are significant negotiations to get through after multiple efforts have failed, Pacquiao’s performance in knocking down New York’s previously unbeaten Chris Algieri in a World Boxing Organization welterweight title fight again heightens interest in a potential bout between the best two boxers of the last decade. Manny Pacquiao, right, punches Chris Algieri during their welterweight title fight at The Venetian in Macao on Sunday. Pacquiao won in a 12-round decision. (Credit:  Xaume Olleros / AFP/Getty Images)

“Manny Pacquiao is a great champion, and when he prepares for a fight, there’s nobody better, nobody who can come close to beating him,” Pacquiao promoter Bob Arum said.

“If boxing is to be considered a major sport, the fight has to happen.”

Some of the luster on the showdown was lost when Pacquiao suffered a 2012 knockout loss to Juan Manuel Marquez, and Mayweather proceeded to become the 2013 fighter of the year.

Then Sunday happened, when Pacquiao fought with a visible thirst for the knockout, following up hurtful blows with more devastating punishment and sending Algieri to the canvas in the second round, twice more in both the sixth and ninth rounds, and again in the 10th.

Pacquiao said belting the former junior-welterweight world champion Algieri so frequently he forced him to “get down and up six times” emboldens the champion to call out Mayweather.

“I want that fight … before I was the only one talking about that fight,” Pacquiao said later in the news conference. “The other [side was] denying to talk about it, so it was [best] to say nothing.