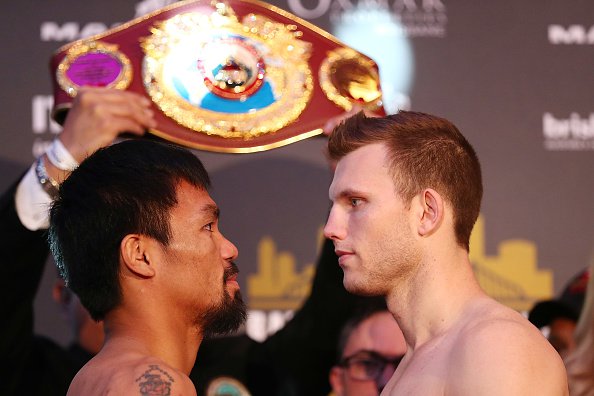 The road show is nothing new for a star on the wane.

With his numbers down from what they were in the States, if still strong for most fighters, Manny Pacquiao is hitting the road this weekend (Saturday, ESPN, 9 PM PST/6 PM PST). Pacquiao is fighting outside the US and it’s hard to argue with the business results. The Suncorp Stadium in Australia is going to look great on the broadcast.

Will Pacquiao look great too?

Much of that will come down to the question: who is Jeff Horn?

Anonymous to even most hardcore fight followers, Horn didn’t even turn professional until after the fourth fateful battle between Pacquiao and Juan Manuel Marquez. There are some recognizable names on his record, faded versions of Randall Bailey and Ali Funeka, but none of them give him recognition yet.

He’ll determine whether he can attain that Saturday night.

If Horn is going to win, his feet and a tricky right hand will be his deliverance. He’s not as fast as Pacquiao, not even this older version. Horn does have canny timing with the right; he throws it straight and as a timed looping lead. The challenger also has a good, hard, straight jab. He can sit down inside but, at least in his last few fights, seems to feel more comfortable using his feet to create space.

While he throws far less than he did in his prime, sometimes closer to half of what he did against the like of Miguel Cotto or Antonio Margarito many years ago, Pacquiao is still effective in picking spots and stringing together combinations. His feet are also still an asset, allowing him to get in and out and around younger foes.

Along with his talent, there is a reservoir of experience opponents have to overcome. There is a reason all three of Pacquiao’s clean losses since 1999 have been to first ballot Hall of Fame talent.

Both guys can be hit. Horn has decent head movement but against Funeka and Bailey he seemed wide open for the jab at times. Pacquiao, the shorter man, may find an advantage there from his southpaw stance. Horn will have a height edge and could try to muscle Pacquiao when they get in close but he’d be open to the body. Funeka put Horn down with a sharp body shot in their fight.

In terms of intangibles, one guy is Pacquiao and one is a guy fighting a live, world-class talent for the first time. What we’ve seen so far from Horn is promising but he’s fighting someone unlike anything he’s seen to date. To his credit, when he was down he got up and won. He’s handled a cut. Adversity isn’t a stranger.

How much adversity will Pacquiao provide? Is this the night where he finally creeps towards the boxing rocking chair? His performances against Bradley and Vargas last year indicate he’s still got a lot left. It’s up to Horn to prove he can top the efforts of those two more proven foes.

Watching his last three fights, it was hard to shake the thought that Horn wouldn’t even belong in the ring with a prime Manny Pacquiao. This isn’t a prime Pacquiao and still nothing about Horn suggests he’s in league with the last two men Pacquiao defeated. It’s hard to gauge before any fight just what youth, hunger, and a massive hometown crowd can mean but based on talent, Pacquiao would have to be greatly receded from where he was when last we saw him to be defeated here. He’s faster, even at 38, hits harder, and has a far more expansive offensive repertoire. His combination punching should more than offset Horn’s over reliance on the right hand and Pacquiao’s body work will bring his hands down. Horn might last the route on guts but Pacquiao is the pick to win.