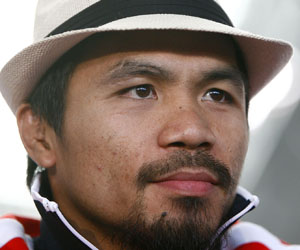 The Bradley side still needs to finalize its deal with promoter Top Rank.

“From our end, the fight is done,” Koncz said. “I just got off the phone with (Top Rank’s) Bob Arum and Manny, so we’re done. I don’t assume there will be a problem from the Bradley side. We came to terms with Top Rank on the fight and Manny has approved everything. This morning I had a number of conversations with Bob negotiating the June 9 fight and I relayed everything to Manny.” Top Rank president Todd duBoef told ESPN.com that he is still working to finalize Bradley’s end of the deal.

“We are going to be having further conversations with Bradley and his management early this week and hopefully finalize the deal,” duBoef said. “But the truth is my (promotional) agreement with Bradley lays out certain parameters for a Pacquiao fight, so there is a framework already.”

The hopes for a long-anticipated Pacquiao-Floyd Mayweather Jr. fight ended last week when, after the sides once again did not come to terms, Mayweather announced he would challenge junior middleweight titlist Miguel Cotto on May 5. Cotto had also been in the running to face Pacquiao in a rematch, but Pacquiao and Cotto could not agree on the weight for the fight. Pacquiao wanted the 147-pound welterweight limit, which Cotto said was too low for him, and he accepted a deal from Mayweather.

The other names in the running to face Pacquiao in the pay-per-view fight were junior welterweight titlist Lamont Peterson and Juan Manuel Marquez, who is 0-2-1 in three incredibly close and exciting fights with Pacquiao, including a majority decision loss to him in November.

Bradley would move up in weight to challenge Pacquiao for his title.

“We’ve been talking about this for over a month and we always had a Plan B in case Mayweather didn’t happen,” Koncz said. “Last time I went to the Philippines, I took Manny tapes of all of the opponents we were talking about and he watched them with his wife, Jinkee. Bradley was one of them, as everybody knows.”

There is a chance Marquez will fight Peterson next, with the winner of that bout getting a fall match against Pacquiao if a Mayweather fight still is not made.

Koncz flew to San Antonio last weekend to meet with Arum, who was there promoting Saturday night’s Julio Cesar Chavez Jr.-Marco Antonio Rubio middleweight title fight at the Alamodome, about the Bradley fight. Cameron Dunkin, Bradley’s co-manager, was also in San Antonio and met with Arum.

Bradley (28-0, 12 KOs), 28, of Palm Springs, Calif., does not have the kind of profile as the other opponents who were in the running, although he is widely considered one of the top 10 fighters in the world even though his most recent fights have not been hits.

Thirteen months ago, he won a sloppy, head butt-induced 10th-round technical decision in a heavily hyped junior welterweight unification fight against Devon Alexander. It did poorly at the gate and did not come close to the ratings expectations HBO had hoped it would achieve, despite spending millions on the fight and its marketing.

Then Bradley rejected a July fight he had called for with Amir Khan to further unify the 140-pound division, even though Khan, who brought far more economic muscle to the fight, offered him a 50-50 deal.

Bradley then split with co-promoters Gary Shaw and Ken Thompson and, despite litigation, signed with Top Rank, knowing a Pacquiao fight was possible.

But Bradley is in his prime, fast and experienced against good opponents, and he could give 33-year-old Pacquiao (54-3-2, 38 KOs) a competitive fight.

“Bradley is a young, undefeated fighter who deserves a chance,” Koncz said. “Manny is excited. Until we name an opponent, boxing is out of Manny’s mind. He’s busy working in (the Filipino) congress. But he gets interested in boxing again when he has an opponent and a fight. Now we know we have a date (and) an opponent and he’s excited.”

Koncz, who lives in Southern California, said he is flying to the Philippines on Tuesday night to meet with Pacquiao and go over logistics for the media tour for the fight.