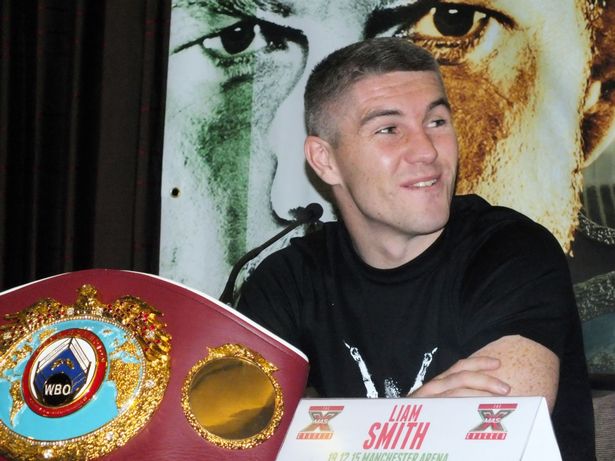 While Jimmy Kelly is honoured to be getting into the ring with Liam Smith for the Liverpudlian’s first defence of his WBO world light-middleweight, the feeling certainly isn’t mutual.

The unbeaten Manchester man has landed himself a surprise crack at the world title, despite never having contested a British or Commonwealth title fight.

And Smith says it’s time Kelly puts his money where his mouth is even if it means teaching him a lesson.

“The couple of names we first asked for couldn’t get done and the fight is in five weeks time so we needed to hurry up,” said Smith. “Jimmy Kelly is number eight in the rankings and he has been using my name for long enough, so now it’s time for him to back it up.

“That’s why I have that bit of fire in me because I was fuming with him for even mentioning me in interviews.

“He hasn’t won a British title and yet he’s talking about me. He’s got his wish now and I’m going to show him how wrong he was to call me out.”

Despite what Smith sees as a straightforward defence, there is little chance he’ll be taking Kelly’s challenge lightly. The Wythenshawe boxer has racked up a decent 16-0 record, claiming the WBO inter-continental title last time out against Martin Fidel Rios.

“There is no way in the world I’m going in underestimating him,” said Beefy. “I have always said a true champion defends his title; I have won and defended the British title in one of my best performances, and I’m going to do that again.

“Without sounding bad, I’m going to wipe the floor with Jimmy Kelly and show the difference in levels; why I’m there and why he shouldn’t. He should be fighting for a British or Commonwealth title, not fighting me.”

The 27-year-old feels more than confident of adding another name his list of victims and insists that not even Kelly’s corner believes he can do it.

He said: “His coach came and sat next to mine last time out in Manchester and said ‘we know we’re not ready for Liam, that fight is down the line’. This was at his last fight, but he has it now, in his next fight. I’ll prove they were right.

“For me, this is just wages for Christmas. It means I go on holiday and have a drink on Jimmy Kelly while lying on a beach somewhere.”

“I’ll put everything into place and stop him late; don’t be surprised if I stop him early though.”

He continued: “I think he forgets that I chose to go to Manchester to fight a Manchester kid, it doesn’t bother me. I have done it before and I’ll do it again. He’s not the biggest ticket seller and I’ll not have the whole of the MEN shouting against me, but even if he did, it can’t help him.”

Moving forward, Smith wants to put the Mosley talk to one side, but does want to look forward to a big fight in 2016.

“I’m hoping to get a big name for April/May or maybe get on that February bill with a decent name. Whatever comes about, I’m happy. If I’m not happy defending a world title then I don’t know what will ever make me happy.”