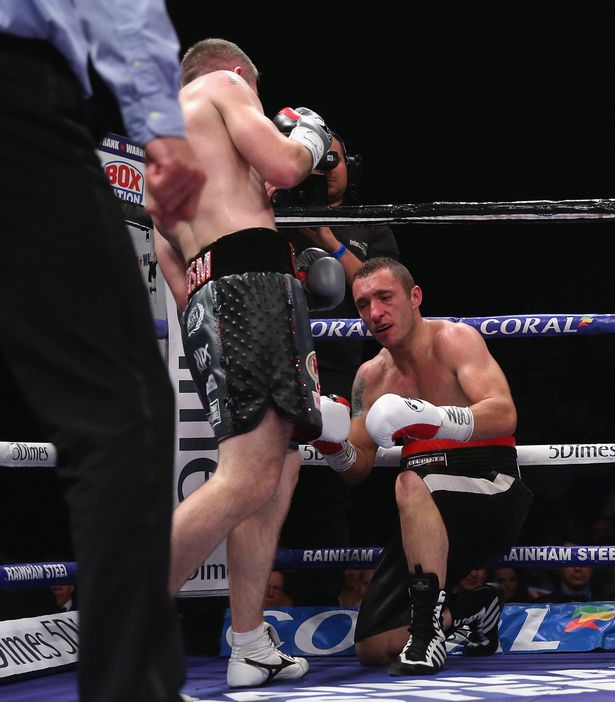 Over and out:  Smith defeated Radosevic inside two rounds

Liam Smith took a step closer to a dream fight against Saul ‘Canelo’ Alvarez by successfully defending his WBO light-middleweight tonight in front of his home fans in Liverpool.

Smith impressed as he stopped challenger Predrag Radosevic in just two rounds to stretch his unbeaten record to 24 fights.

He put Radosevic down with a left hook to the body and the Montenegrin showed little enthusiasm to get up as he waited for referee Steve Gray to count him out.

It was not the way Smith would have wanted to win and questions will be asked about Radosevic, who showed little appetite for the fight. Smith will press on and promoter Frank Warren is in talks with Canelo’s camp about a possible fight against the Mexican sensation.

Warren was in negotiations with Golden Boy six months ago only for Canelo to opt to fight Amir Khan instead last month.

Smith, 27, is due a huge fight to give him the limelight he deserves and he is one of the least-heralded of Britain’s 13 world champions. After the crowd inside the Echo Arena paid tribute to Muhammad Ali, Smith did a number on Radosevic to become the first man after two-weight world champ Felix Sturm to stop the Montenegran.

Smith edged the first round, knocking Radosevic’s head back with a strong jab before clouting him with a stinging right.

His jab rocked Radosevic again in the second, pinning him in the corner and he opened up on the challenger. He unloaded a flurry of shots before winding Radosevic with a left hook to the ribs.

Radosevic rested on his hunkers, but did not want to rise to his feet as Gray counted to 10 to end the contest one minute and 34 seconds into the second round. He told his corner he felt like he had broken a rib, such was the venom of Smith’s punch.

But what is clear is that he needs a better class of opponent to show the world just how good he is.