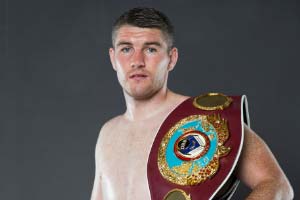 WBO junior middleweight champion Liam “Beefy” Smith (23-0-1, 13 KOs) didn’t pull many punches when he hosted an AMA (Ask Me Anything) on Reddit Boxing ahead of his clash with former two-division world champion Canelo Alvarez taking place September 17 at AT&T Stadium in Arlington, Texas.

Here are the highlights…

I don’t want to give too many of his weaknesses away. Certainly not now. He’s got a lot of weaknesses. He doesn’t like fighting three minutes of each round. That’s one of them that’s not really hard to see.

On whether Canelo ducked Golovkin:

Yeah, ducked him massively. He went the wrong way about it. He’s being criticized a lot and losing a lot of fans about the way he did it. If he was open and honest about it, people would have understood. If he said, ‘look, at the moment I’m not 160. GGG wouldn’t come down.’ If he said, ‘look I’ll fight you in 12 months time, I’m going to build myself to 160’ he’d have bought himself grace. But the way he went about it after the fight with Cotto he got GGG in the ring and said he’d put the gloves back on. Then after the fight he said the thing about his balls, he built the fans up about fighting him next and then he gave the belt up. I just think he went about it the wrong way.

On fighting Golovkin himself should he beat Canelo:

Obviously, when I beat Canelo, the next fight would be a rematch. I’ll beat Canelo and they’re going to offer as much $ as they want to put the record straight and come up with every excuse in the book. You know, I’ve just told people on SM, he’s saying he’d love to fight Pacquiao. It’s embarrassing they’re talking about Canelo-Pacquiao. They’re gonna be very embarrassed when I beat them in September…I’m not gonna kid the public like Canelo and say ‘yeah I’ll fight GGG’ because that’s where he let himself down because he said, ‘Yes I’ll fight you now.’ But when I beat Canelo I’m still only a 154 pounder. I’ll fight GGG when and if I decide to go to 160. For the time, I’m a 154 and not big enough for 160 at the moment.

I would have taken the fight at 155. I can make 155 and I can even do 156. The negotiation was 154 and I understood why because he has to save face. To look respectful for him to give his middleweight title up, he has to come back to 154. That’s why I was always confident I could get the fight. It would be embarrassing if he ducked Golovkin and didn’t. I knew he had to come to 154. From their point of view, he beats me and is back a champion at 154. ‘I can make 154. I’m not fighting GGG at 160.’ That was their excuse.

On his nickname “Beefy”

I was fat when I was a baby and growing up. So maybe 14 or 15 I was chubby and very fat. My dad called me “Beefy” when I was a kid and it stuck.