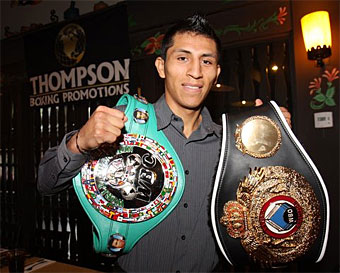 The headliner will see a matchup of Tijuana, Mex., natives.  Burgos (28-1, 19 KOs) annexed both the WBO Latino and WBC Silver 130-pound titles on the Pacquiao-Marquez III undercard last Nov. 12.

Cristobal Cruz (39-12-3, 23 KOs) is 0-1-2 in his last three, with losing his IBF world title to Orlando Salido sandwiched in between technical draws to Ricardo Castillo and Art Hovhannisyan.

Meanwhile, de Oliveira (19-1, 13 KOs), of Sao Paolo, Brazil, is on a three-bout winning streak that includes an eighth-round knockout of Diego Loto for the WBO Latino interim 122-pound belt.

Also on the card, bantamweight Isaac Zarate fights Joshua Berrelleza.  Coming off a successful points victory over Anthony Briones in his pro debut, Zarate (1-0), from South Los Angeles, has been Brian Viloria’s main sparring partner for the past three weeks in preparation for his WBO flyweight title defense against Giovani Segura.

Berrelleza (1-0), from Riverside, Calif., is a former highly touted amateur who also won his debut, a four-round unanimous decision over Albert Tovar.

The card will be promoted by Thompson Boxing.

The site is yet to be determined, but sources have advised BoxingScene.com that the show will likely take place in Southern California.