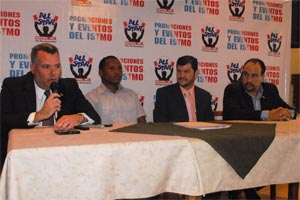 This morning at Jade Restaurant in Panama City, an alliance between All Star Boxing headed by promoter Felix “Tutico” Zabala and Promociones del Istmo headed by Rogelio Espino became official with the signing of a co-promotional deal for former welterweight champion and currently WBO #11 ranked Vicente “El Loco” Mosquera. This promotional contract will last three years, with Mosquera’s first bout being on October 19 against Cosme Rivera for a regional title to take place with the WBO Convention to be held from October 22 to 26 October in Hollywood, Florida. There are also plans to promote other Panamanian fighters in the U.S.