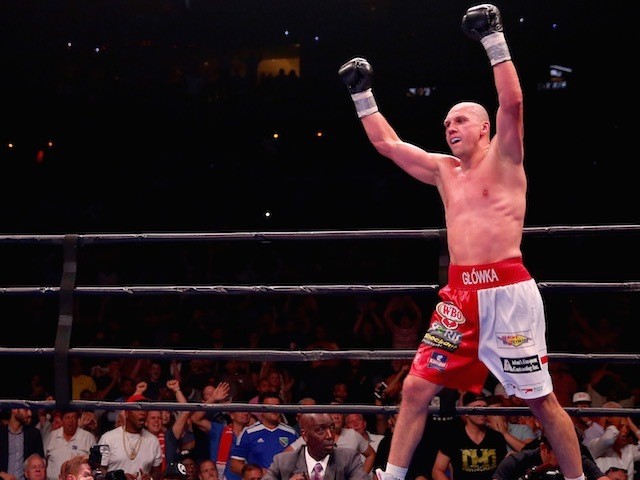 Krzysztof Glowacki is undefeated, 10 years younger than his upcoming opponent and riding the momentum of a dramatic come-from-behind, title-winning knockout. But his biggest advantage against Steve Cunningham could be his southpaw stance.

Cunningham has labored against lefties, getting dropped six times while posting a 3-2-1 record, with both defeats coming against Yoan Pablo Hernandez in successive 200-pound championship fights.

The first loss to Hernandez was by disputed sixth-round technical decision in October 2011, when Cunningham was floored in Round 1 before the bout was stopped due to a Hernandez cut caused by a headbutt. In the rematch four months later, Hernandez put Cunningham on the canvas twice in the fourth round and won by unanimous decision.

On Saturday, Krzysztof Glowacki (25-0, 16 KOs) will attempt to become the latest lefty to befuddle Steve Cunningham (28-7-1, 13 KOs) when the two clash at Barclays Center in Brooklyn, New York (NBC, 8:30 p.m. ET/5:30 p.m. PT). Glowacki will be making the first defense of his 200-pound crown, while Cunningham will be returning to the weight class where he twice won world titles before moving to heavyweight, where he went 4-3-1 over the last four years.

Both boxers will be back in action for the first time since August 14, when Glowacki and Cunningham fought on the same Premier Boxing Champions card at the Prudential Center in Newark, New Jersey. That night, the 29-year-old Glowacki rose from a sixth-round knockdown to dethrone Marco Huck by 11th-round stoppage, denying the German a division-record 14th straight title defense.

Then in the main event, the 39-year-old Cunningham struggled against yet another left-hander, battling former 175-pound world champ Antonio Tarver to a split draw in a heavyweight battle.

“I did not see the Cunningham-Tarver fight, but my coach was watching,” says Glowacki, referring to trainer Fiodor Lapin. “I cannot disrespect Cunningham’s power when you’re talking about Tarver, because we all know how good Tarver is defensively.”

Lapin was the man with the plan for southpaw Artur Szpilka in his heavyweight title match against world champion Deontay Wilder in January. Wilder had a tough time figuring out Szpilka until the ninth round, when the champ crushed Szpilka with a counter right hand and knocked him out cold.

“We are not looking at Cunningham as a southpaw thinking he is easy to hit,” Lapin says. “I don’t yet have a blueprint how to fight him, but no doubt there’s stuff, errors in both his offensive and defensive stance that we can exploit. What I’m doing is finding his mistakes.”

Not only did Lapin get a ringside glimpse of Cunningham against Tarver, but he worked the opposite corner for Cunningham’s two fights against Krzysztof Wlodarczyk. The Polish fighter won a vacant 200-pound title by split decision over Cunningham in November 2006 before being dethroned in their rematch by majority decision in May 2007.

“Tactically, Cunningham is a lot harder to fight than Huck, who is simple: Stay close, don’t let him start swinging, hit him before he wants to hit you,” Lapin says. “Steve Cunningham is a more difficult fighter who gives you more complications.”

Prior to Glowacki’s rally in August, Cunningham had been the last 200-pound fighter to defeat Huck, winning the first defense of the title he won from Wlodarczyk by 12th-round stoppage in December 2007. But Cunningham was dethroned in his next fight by Poland’s Tomasz Adamek, falling by disputed split decision in December 2008.

Cunningham avenged the defeat four years later when he and Adamek squared off as heavyweights, earning a split-decision victory.

“I’ve watched Cunningham’s old fights with Hernandez, Adamek and Wlodarzcyk, and I noticed his long reach, which makes a difference, and how quickly he responds to being hit,” says Glowacki, whose 75-inch reach is seven inches shorter than Cunningham’s. “When you hit him, he wastes no time before he retaliates.

“My trainer will show me a round or two of how he fights, but regardless, I know that Cunningham is a fighter who likes to bring it. This is possibly his last opportunity [to win a championship], so I feel this is going to be a fan-friendly fight.”